Report: Knicks in talks to acquire one of Portland’s first-round picks 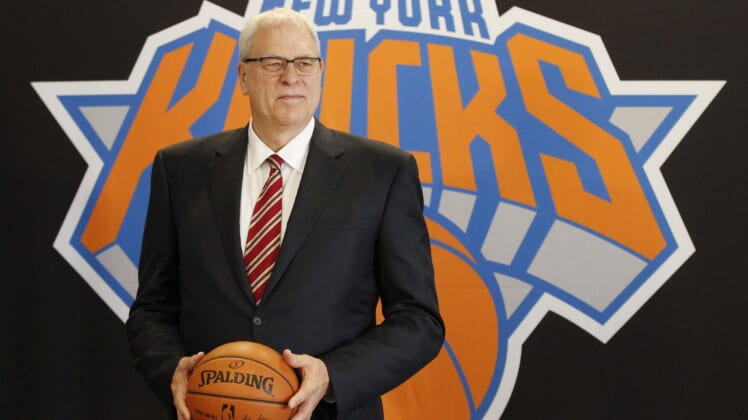 Phil Will Need A Miracle – Photo: The Star-Ledger-USA TODAY Sports

The New York Knicks are reportedly working the phones in an attempt to acquire one of the three first-round picks owned by the Portland Trail Blazers.

“The Knicks have talked to the Portland Trailblazers about acquiring one of Portland’s first-round picks, a source confirms to ESPN,” wrote Ian Begley of ESPN. “The Knicks have workouts scheduled with at least one player pegged for a mid to late first-round pick in UNC’s Justin Jackson and are looking to acquire a second first-rounder to add to the pick they currently own – the No. 8 overall pick. Portland owns the 15th, 20th and 26th overall picks.”

Of course, the immediate reaction would be to wonder if Carmelo Anthony is part of these talks. It’s no secret the Knicks want to be rid of Anthony.

What we don’t yet know is whether Anthony has any interest in moving to the west coast to compete against the likes of the Golden State Warriors and San Antonio Spurs. He’s had no luck contending for a championship playing in the Eastern Conference. The closest he ever got to the title was when the Denver Nuggets were stymied by the Los Angeles Lakers back in 2009 in the conference finals.

We also don’t know if Anthony is part of these trade discussions at all. Though, it would seem to make sense from the perspective of all parties, if Anthony is on board. The Blazers have a talent gap themselves when compared to the likes of Golden State, and Anthony can still score at will in this league.