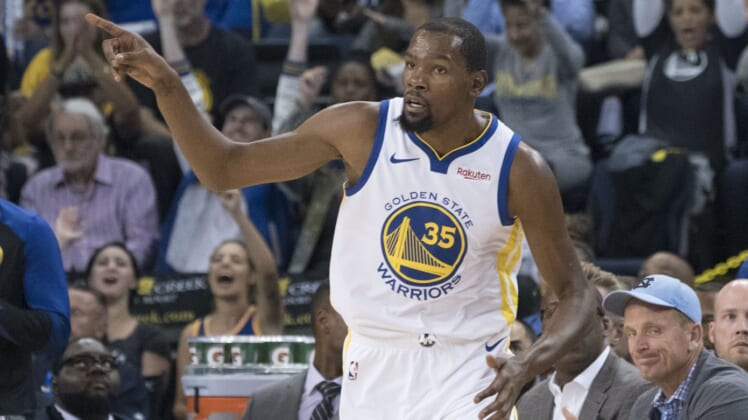 As rumors swirl that Kevin Durant is upset with the Golden State Warriors over the way they handled his injury, the New York Knicks continue to be mentioned as a likely landing spot for the superstar.

NBA insider Ric Bucher was a guest on The Herd with Colin Cowherd, and he reported Durant prefers to sign with the Knicks. Additionally, Bucher said that Durant and Kyrie Irving have “met a couple of times” since Durant’s calf strain injury and also met following Durant’s surgery for his ruptured Achilles.

“My understanding is that they’ve been talking about potentially playing together for years since playing on the national team together,” Bucher said.

He also said that Irving prefers the Brooklyn Nets (which is something that seems like a done deal now), and that ultimately Durant is not likely to pull the trigger to join Irving in Brooklyn.

Bucher then broke down the many reasons that he’s hearing Durant is going to sign with the Knicks in free agency:

“He has so many ties to the Knicks organization. He’s the godfather of Royal Ivey’s daughter, a Texas alum, and a former teammate at OKC. Those guys are really good friends and he’s still an assistant coach with the Knicks. There is even a report that DeAndre Jordan, who played for the Knicks last year and is close with KD, could add fodder.”

The Warriors are expecting to meet with Durant this week ahead of free agency, along with Klay Thompson. However, given the explosive allegations levied against the organization by Andre Iguodala as it relates to covering up injuries, one wonders if Durant will struggle to trust the Warriors going forward.