The details are sketchy at this point, but according to a report by ClevelandScene.com, Cleveland Browns quarterback Johnny Manziel was involved in a massive fight late Friday night in downtown Cleveland.

The alleged victim, 33-year-old Sandusky resident Chris Gonos, reported to police that he and his girlfriend spotted Manziel while waiting for an elevator at the high-end apartment complex, where many Cleveland professional athletes live, and professed his love to the rookie quarterback.

Gonos told police he pointed Manziel out to his girlfriend: “That’s Johnny Manziel.” Then he approached him.

According to the report, “at this time victim stated to the unidentified male, ‘I’m the biggest Browns fan ever, I love you, I want to give you a hug.'”

Gonos stepped towards Manziel and was promptly punched in the face, the alleged victim’s account to police says, followed by a beat down by Manziel’s crew, giving the man a “swollen lip, right eye swollen, red face.” A security guard intervened and also was hurt.

Here is the full police report of the incident. 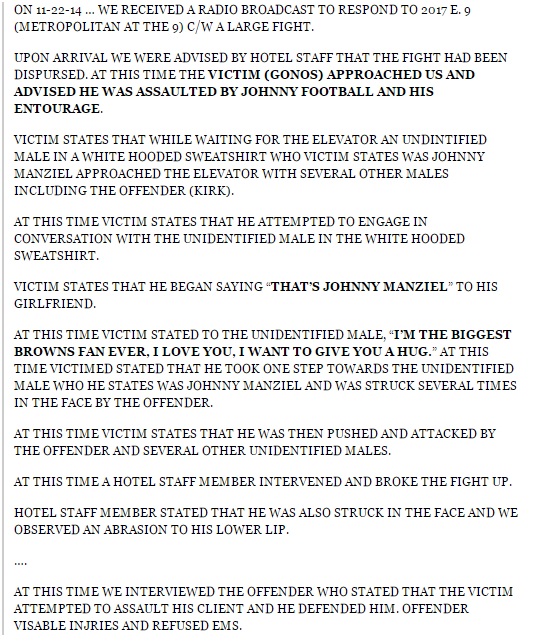 While there is no more information available at this time, the Cleveland Browns are expected to release a statement at any moment.

Needless to say, this isn’t good news for the rookie quarterback, who has been warming the bench all season long. He came into the NFL with character concerns and didn’t do a whole bunch to quiet those during the offseason.

We will update this article when more information is released.