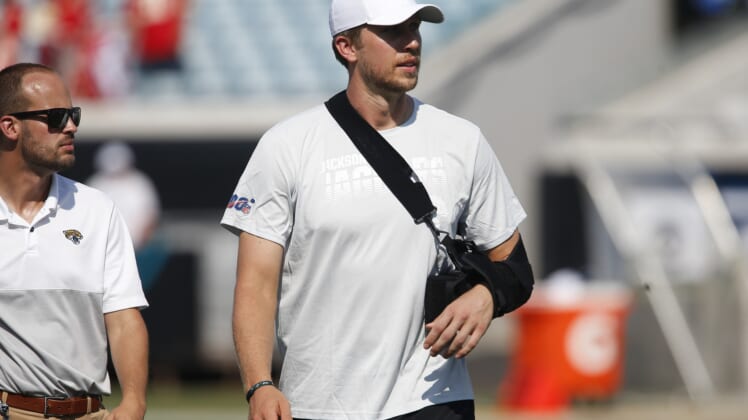 Less than a calendar year after signing a whopping four-year, $88 million deal with the Jacksonville Jaguars, quarterback Nick Foles’ future in Duval is up in the air.

According to Peter King of NBC Sports, the Jaguars are expected to go with young signal caller Gardner Minshew as their starter next season. In turn, they will try to trade Foles.

“One of my favorite X factors is Foles, assuming, as many in combine hallways believe, that the Jaguars go with Gardner Minshew. Foles is 31, a Super Bowl MVP, a great team guy, a pocket guy in need of a good offensive line and outside weapons,” King noted. “The more I think of Foles, and the more I think of a landing spot if he’s not a Jag, I think I might be able to talk myself into the Colts. Makes a lot of sense, especially behind that line, and especially with how much help he’d be to Jacoby Brissett.”

Foles would be hard to move after an injury-plagued 2019 campaign that saw him start just four games. In fact, the 31-year-old Foles has thrown a grand total of less than 500 regular-season passes over the past four years.

Adding to the issues here is the fact that the former Super Bowl MVP is set to count $22.1 million against the cap in 2020.

There’s a plethora of teams in the market for an upgrade at quarterback. Though, there’s also a ton of viable free agents set to hit the open market in March 18.

As it relates to Minshew, it’s easy to see why the Jaguars think he’s both their short and long-term option.

A late-round pick out of Washington State, Minshew was tremendous as a rookie. He put up 3,271 yards with 21 touchdowns and six interceptions in 12 starts.