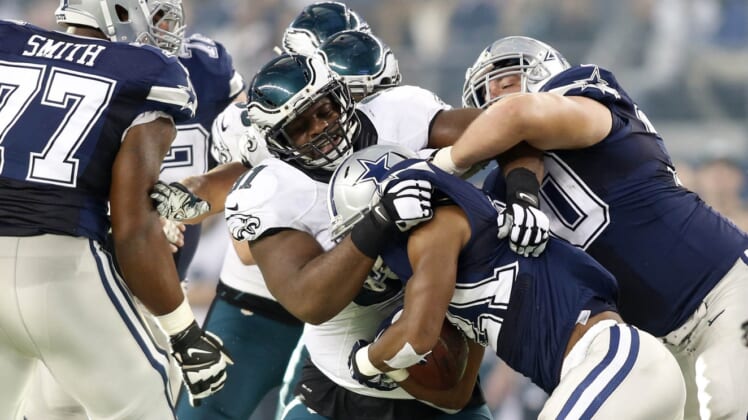 Fletcher Cox, who sat out Philadelphia Eagles OTAs recently to protest his contract situation, is now a happy man.

Cox and the Eagles have agreed on a massive new contract.

According to ESPN’s Adam Schefter, it pays him $103 million over six years, with an astounding $63 million guaranteed.

This makes Cox the proud new owner of the richest guaranteed contract in NFL history for a defender. Previously, Marcell Dareus of the Buffalo Bills held the record with $60 million guaranteed.

Cox is expected to be a huge beneficiary of new defensive coordinator Jim Schwartz’s 4-3 scheme, which emphasizes penetration.

“Fletcher is a special player who has not only the ability to be the kind of player that he has become, but also the desire and the work ethic,” said defensive line coach Chris Wilson, per the team website. “He is a great teammate with a high football IQ and he does everything you could want as a defensive line coach. It’s a pleasure coaching Fletcher.”

He racked up 9.5 sacks last year as a 3-4 defensive end. Now he’ll move back inside where he’s most comfortable as a defensive tackle in a 4-3.

Obviously, the Eagles expect him to thrive. This new deal has him signed in Philly through the 2022 season.