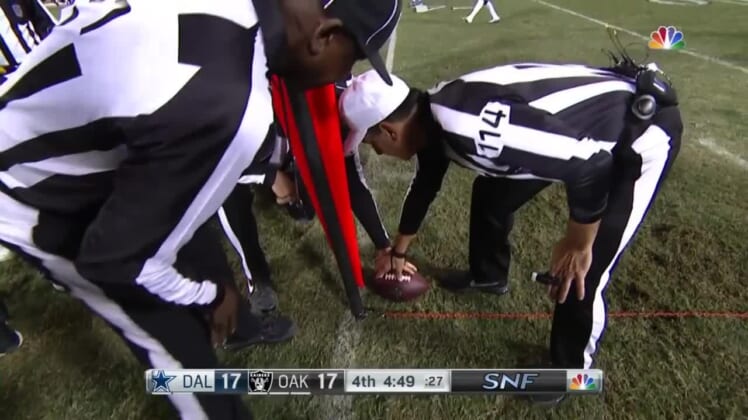 A recent report by EthicalSkeptic.com lays out an argument – and lots of data – to show the bias against the Raiders is indeed real.

Does the NFL work to disadvantage specific teams like the Raiders?

Yes, says a recent report by EthicalSkeptic.com which outlines over 60 years of data to show the bias is very real – not to the surprise of many in Raider Nation.

In the report, the site and its analyst – a former Naval intelligence officer and current corporate strategy executive – layout the case. And before you toss out the argument as ludicrous or impossible, it’s helpful to understand the methodology and approach Ethical Skeptic used when putting the Raiders penalty affliction under the microscope.

Starting with the Most Recent Season – 2019

Ethical Skeptic first looked at 2019, when again the Raiders led the league in penalties for the majority of the season. Not only were they the most penalized, but their penalties came at the worst times often directly correlating to a win versus a loss.

“For the 2019 season, the greatest differential between penalties against and penalties for once again is held by the Oakland Raiders,” the report states.

Before you say: “well, the Raiders are just undisciplined and the penalties are their own fault,” Ethical Skeptic looked at that too.

“I labored under that myth for decades,” the Ethical Skeptic told us on our most recent Silver and Black Tonight show on CBS Sports Radio 1140. “This year, when I looked at the penalties, I defined a class of penalty called the discipline class. That’s a class of penalties like delay of game, too many players on the field, neutral zone infractions, encroachment, false start – all those things the fans can easily see on TV and easy to pick off those penalties.

“Those are the indicators of the team’s discipline and coaching, and discipline in regard to that type of penalty control in their game. Surprisingly, when I looked at those classes of penalties for the Raiders, they were at 80% of the NFL average. In other words, they were in the top third in discipline when it comes to those types of penalties.”

So if the Raiders don’t have a discipline problem – or one where they’re getting penalties for a lack of discipline – then when are they getting all these penalties?

“The vast majority of the penalty incident imbalances involve calls of merely subtle interpretation (judgment calls),” Ethical Skeptic says. “These are plays that can be called on every single play but are not called for certain teams and are more heavily called on others.”

Those types of plays include offensive and defensive pass interference, holding, and roughing the passer – just to name a few.

“With these types of penalties, the Raiders are penalized at double the rate of the NFL average,” Ethical Skeptic says. “Especially as it pertains to first downs, automatic first downs and scoring drive sustaining penalties.”

As the Ethical Skeptic told us, the Raiders are not only getting jobbed on these judgment calls, but the calls against them come at the absolute worst time and have a profound impact on games they play in.

“The penalties thrown against the Raiders are done so at the most critically-disfavoring moments in their games,” Ethical Skeptic states. “Times when the Raiders have forced the opposing team into 3rd down-and-long circumstances and their opponents need a break and an automatic first down to sustain a scoring drive.”

This is known inside any other context as cheating. And when members of the league are forced under financial penalty (extortion) to remain silent about this reality…this becomes a form of racketeering. – Ethical Skeptic

Just using 2019 data, the Raiders had 37 more drives negatively impacted by penalties in comparison to their NFL opponents. That means Raiders’ opponents had a staggering 96 additional opponent score points. That equals, according to Ethical Skeptic’s research, an additional six points per game being awarded to Raiders opponents in 2019.

“That makes a difference in making the playoffs too,” Ethical Skeptic says. “It’s truly the difference between a 7-9 versus a 9-7 (or possibly a 10-6) record.”

Based on his research, this means the Raiders are held to a far higher standard than the rest of the league. Violations like defensive holding, unnecessary roughness, offensive and defensive pass interference, roughing the passer, illegal picks, illegal contact, and player ejects – are called disproportionately more against the Raiders.

If those calls go against the Raiders more than any other team in the NFL on a given week in a given season, why?

“This is known inside any other context as cheating,” Ethical Skeptic says. “And when members of the league are forced under financial penalty (extortion) to remain silent about this reality…this becomes a form of racketeering.”

Another often reasoning for the Raiders continued inequity when it comes to penalties is the discipline myth and how it’s often attached to whomever the coach might be at that time. The prevailing thought is if a coach isn’t successful (wins and losses) on the field, his team’s lacked discipline and he just didn’t run a tight ship.

Ethical Skeptic did a deep-dive in this area as well and found it doesn’t help your penalty total when you’re the head coach of the Raiders. In fact, coaches who have had jobs before and after their stint with the Raiders, were penalized 26.3% more when they wore the silver and black than they were before or after.

“This significant disadvantage has been part of the impetus which has shortened many coach(ing) tenures with the Raiders,” Ethical Skeptic says. “Thereby helping account for the 3.3-year Raiders average tenure versus the 6.6-year tenure average for these coaches both before and after they were head coach of the Raiders.”

This data shows it is more difficult to be the coach of the Raiders – insomuch as you’re automatically going to be penalized more – and harder to keep your job.

“Not even one of the 19 head coaches in the entire history of the Raiders organization bucked this trend of being higher penalized as a the team’s head coach,” Ethical Skeptic said. “Not even one. Let that sink in.”

Looking through the data, clearly, the Raiders and their coaches are scrutinized and penalized more than their counterparts throughout the NFL. It’s hard to argue with the data and no counter-argument or reasoning holds up. But what about players who slip on that sliver helmet and black jersey?

Apparently, it hurts them too and the bias only follows them when they’re a Raider.

More recently it was pointed out Gareon Conley, the former first-round draft pick of the Raiders traded to the Houston Texans during the 2019 season, has not been called for one penalty since be acquired by his new team. He was called for three as a member of the Raiders in 2019 – including two in one game against the Vikings.

Could the fact players are at a disadvantage also prevent them from wanting to play for the Raiders? The Ethical Skeptic says it might.

“Such deterrent constitutes a disincentive for players to want to play for a team which is penalized so often,” the report states. “That potentially mares their (players for the Raiders) careers and negatively impacts their dream for a Pro Bowl, MVP, or even Hall of Fame selection.”

It’s worth noting that Ethical Skeptic’s research did show after the Al Davis lawsuit partnership over the Los Angeles move in 1982, the bias and amount of penalties against the Raiders did increase. In fact, after 1982, the Raiders have remained in the Top 3 penalized of all NFL teams (1-2 year exceptions).

So Where from Here?

Now that there’s a viable and strong argument the NFL’s officiating apparatus is biased against the Raiders, what next?

“I want to make it clear here, we’re not accusing referees of being dishonest,” Ethical Skeptic says. “They’re hard-working people, they’re honest people, but we know there are mechanisms of systemic bias and the organization itself is creating the bias. And you don’t undertake the corrections – the quality control methodology that you need to correct the product that’s being delivered to your customers – that’s when you get into the area of doing things wrong as an organization.”

Ethical Skeptic did say part of his reason for researching the subject (he’s a self-admitted lifelong Raiders fans) and writing the report was to get the attention of the NFL.