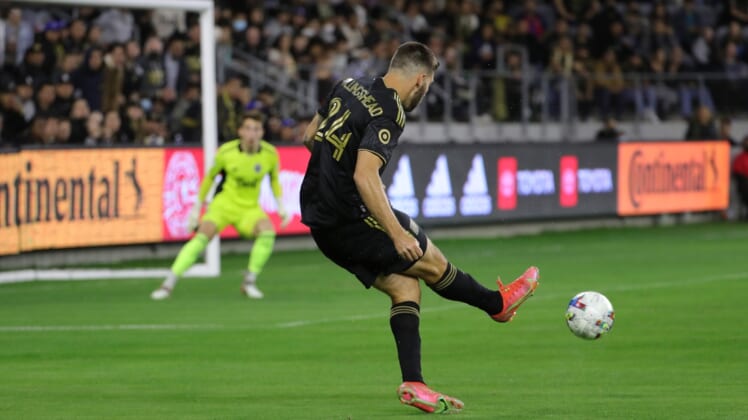 When Los Angeles FC last took the field, the team got a pair of goals from Ryan Hollingshead and one from leading scorer Carlos Vela in a come-from-behind 3-1 win over the Vancouver Whitecaps.

That was two weeks ago. LAFC (3-0-1, 10 points) got last weekend off for the international break and goes into its game at Orlando City SC on Saturday undefeated and tied for the Western Conference lead. Orlando City was one of six MLS teams that took the field last week as international play was taking place.

LAFC has matched its best four-game start to a season in club history, tying the 10 points the 2019 team earned in four games. The club is undefeated in its last eight games in which it led at halftime, as was the case against Vancouver at home.

Vela added an assist in that game. Hollingshead, formerly with FC Dallas, scored multiple goals in a game for the first time in his MLS career in his 208th appearance, including playoffs.

“As a defender, I am not in goal-scoring opportunities enough to get braces very often but I do sneak some goals in there,” Hollingshead said. “Every year I am in the four- to five-goal range, which I love, but let’s double it up this year.”

LAFC has a win and a draw against Orlando in the only two regular-season meetings between the teams, but lost to Orlando City on penalty kicks in the MLS Is Back tournament in 2020.

Orlando City (2-1-2, 8 points) had its third win of the season seemingly in hand last weekend in Portland. The Timbers lost Josecarlos Van Rankin to a second yellow card, already trailing 1-0 in the second half. But a foul in the box gave Portland an opportunity from the penalty spot and they converted in the 80th minute to tie the game. Orlando couldn’t deliver a winner before time expired.

Junior Urso had Orlando’s goal against the Timbers. Until this season, Orlando had won all seven games when Urso scored.

“Collectively, it was a terrific effort. The discipline that we had and the understanding of how we can control Portland was very good,” head coach Oscar Pareja said. “Could have been much more, but this club is growing.”