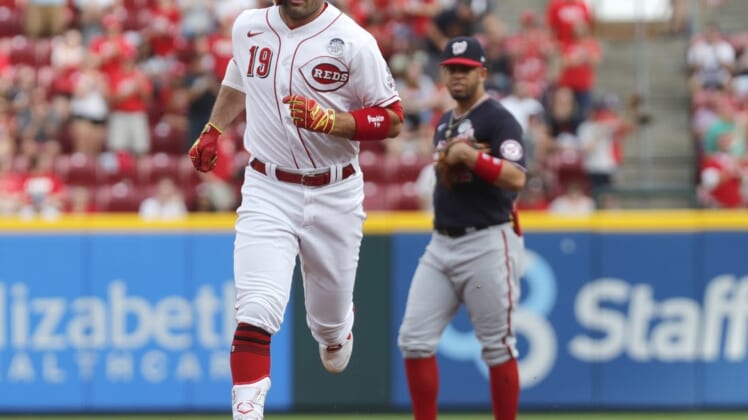 Matt Reynolds also connected for his first home in the majors in over five years.

Four different batters had two hits apiece for the Reds, who opened their eight-game homestand with a win and have won six of eight.

Ashcraft (2-0) continued his impressive rookie season. After 6 1/3 shutout innings against the San Francisco Giants six days earlier, the right-hander extended his scoreless streak to 12 2/3 innings before allowing a home run in his seventh and final inning of work.

Using his heavy sinker and upper-90s four-seam fastball, Ashcraft induced 14 groundouts and five strikeouts. His only mistake of the night came with one out in the seventh, when Josh Bell took a fastball to the opposite field for his fifth homer.

The homer ended Washington’s scoreless drought at 27 innings, dating to sixth inning of a 13-5 loss to the Mets in New York on Monday.

The Nationals have lost the first four games of their 10-game road trip by a combined 36-6 score.

After just missing a pair of home runs in Boston two nights earlier, Votto left no doubt with a long home run halfway up the sun deck in right field in the first inning. Votto’s third homer of the season came after Brandon Drury singled and Tommy Pham walked with one out.

In addition to the Votto homer, Washington starter and loser Joan Adon (1-9) walked four and struck out four, allowing six hits and three runs over 5 1/3 innings in suffering his seventh loss in eight starts. Adon was aided by a pair of double-play balls in the first three innings.

The Reds broke the game open with five runs in the seventh, starting with Reynolds’ first homer since May 21, 2017, when he was with the New York Mets. Pham added a sacrifice fly and Farmer hit his three-run shot later in the frame.