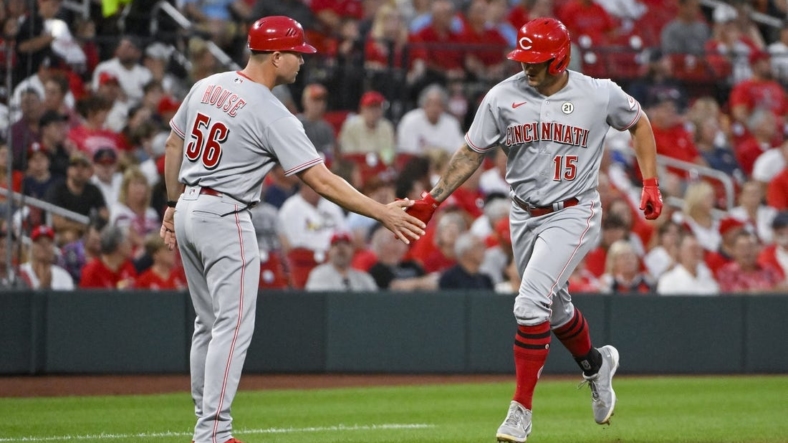 The Reds (57-86) snapped a six-game losing streak while the Cardinals (84-60) lost for the fourth time in seven games.

Cincinnati starting pitcher Chase Anderson (1-3) allowed one run on one hit and two walks in five innings. He struck out three.

Ian Gibaut pitched a scoreless inning, Buck Farmer blanked the Cardinals for two innings and Alexis Diaz surrendered a run in the ninth but still earned his seventh save.

Senzel’s homer put the Reds up 1-0 in the second inning.

After Kyle Farmer flied out, Jake Fraley hit a sacrifice fly to put the Reds up 2-0. Cincinnati tried to add another run with an aggressive baserunning play, but Friedl was thrown out trying to steal home.

The Cardinals cut the deficit to 2-1 in the bottom of the inning. Lars Nootbaar walked with one out, Brendan Donovan was hit by pitch, and Paul Goldschmidt lined a two-out RBI double.

Donovan also tried to score on the play, but the Reds threw him out with a pinpoint relay from left fielder Friedl to shortstop Farmer to catcher Romine.

Aquino’s solo homer in the sixth pushed the Reds’ lead to 3-1.

Cincinnati got a runner to third base in the seventh. Spencer Steer hit a leadoff single, moved to second base on a bunt and took third on a groundout. India walked, but Farmer grounded into a forceout to end the inning.

The Reds threatened again in the eighth. Donovan Solano walked with one out and moved to third on Aquino’s double. Stuart Fairchild pinch-ran for Solano, but Nootbaar threw him out trying to score on Senzel’s liner to right field.

Albert Pujols’ sacrifice fly cut the lead to 3-2 before Arenado stole second base, but pinch hitter Corey Dickerson grounded out to end the game.