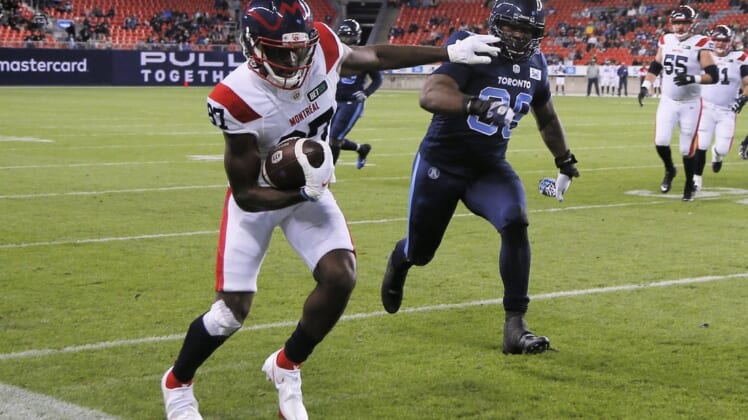 The Ottawa Redblacks are the only winless team in the CFL and they will be out to change that Thursday night against the visiting Montreal Alouettes.

Both teams are coming off close losses.

The Alouettes (1-4) squandered a big lead in losing 32-31 to the visiting Edmonton Elks last Thursday.

The Redblacks (0-5) lost 25-23 to the host Hamilton Tiger-Cats on Saturday after failing to hold a 23-18 lead late in the game, surrendering a touchdown in the final minute.

“There’s disappointment in a close loss,” Redblacks coach Paul LaPolice said. “We (win) and all of a sudden, everyone’s ecstatic and positive.”

The Redblacks’ hopes for a turnaround come from the regular-season schedule that has them playing nine of their final 13 games within their own East Division. None of the four teams had a winning record, through last week’s play.

“As we’ve told the guys, we’ve played a bunch of Western teams, now we’re playing the Eastern teams,” LaPolice said. “The East is where you get your playoff ranking. It’s difficult. If we win this week, we know we can keep up with everyone else. We’re just trying to get a win; it’s been too long.”

The Alouettes led Edmonton 24-12 at halftime and 31-12 midway through the third quarter. Three pass interference penalties led to three touchdowns for the Elks, who also intercepted two passes and had a fumble recovery.

“We have to have more urgency,” said Alouettes’ receiver Eugene Lewis, who caught six passes for 78 yards. “Coming out of halftime that basically has been our problem. That third quarter, we get stuck in the mud. We have to find a way to get out of it and want it more. In the red zone, we’ve got to score touchdowns. When we come out after halftime we have to keep our foot on the gas. We can’t get complacent or comfortable.

Redblacks defensive back Patrick Levels (knee) should return Thursday. Defensive backs Justin Howell (shoulder) and Abdul Kanneh (ankle) were listed as out, as was running back Brendan Gillanders (groin).

“We’ve done enough talking about it,” Lewis said. “We’re right there. We’re close. At this point in time, we’ve got to do it.”