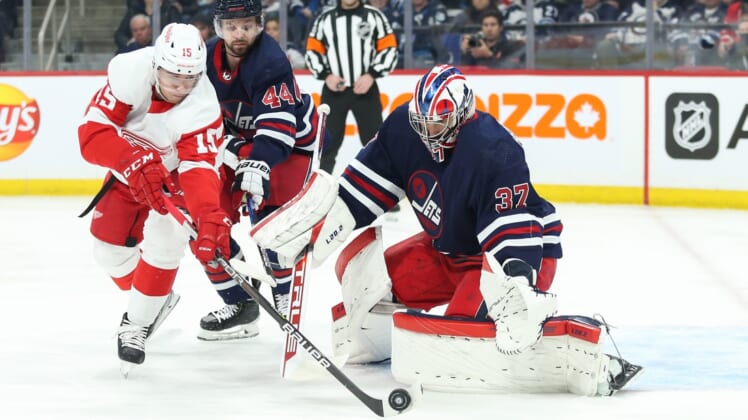 Michael Rasmussen scored the tiebreaking goal near the midway mark of the third period, and Thomas Greiss made 32 saves to snap a six-game starting losing streak, as the visiting Detroit Red Wings defeated the Winnipeg Jets 3-1 on Wednesday night.

Tied 1-1 with 10:49 left in regulation, Rasmussen poked at an active puck and got enough of it on his stick to beat Winnipeg netminder Connor Hellebuyck (32 saves) for his third goal in as many games, and fourth in his last five. In his second extensive season of NHL action, Rasmussen has a career-high 12 goals for the Red Wings (28-34-9, 65 points), who have won back-to-back games for the first time since Feb. 9 and 12.

Detroit’s Sam Gagner scored twice, including an empty-netter. However, it was Greiss who rose to the challenge. Especially during a Winnipeg flurry late in the third, to win for the first time since Feb. 17.

Meanwhile, Mark Scheifele scored for the Jets (33-28-10, 76 points), whose playoff chances in the Western Conference continue to dwindle. Winnipeg was amid an 11-4-1 stretch before dropping three straight in less than a week’s time.

Though Winnipeg outshot the visitors 13-5 in the opening period, it was the Red Wings who went into the first intermission with a 1-0 lead. Off a two-on-one while short-handed, Dylan Larkin pushed the puck across the slot to a streaking Gagner, who beat Hellebuyck with 1:20 left in the first.

Meanwhile, in the second period, it was Detroit that held a 17-9 advantage in shots on goal. But, the lone goal of the period went to the Jets, when Scheifele tipped in a shot from Nate Schmidt — back from a three-game COVID-19 absence — to tie the contest at 6:01 into the middle frame.

Winnipeg thought it went up 2-1 later in the second, but Blake Wheeler’s goal was taken off the board after video review showed the play was offside.