To complete the deal, the Red Sox picked up a pair of pitchers from the Royals, left-handers Luis De La Rosa and Grant Gambrell, along with outfielder Freddy Valdez from the New York Mets.

In the original move on Feb. 10, the Red Sox sent the former American League Rookie of the Year runner-up Benintendi to Kansas City while the Royals shipped outfielder Franchy Cordero to Boston. In addition, the Royals dealt outfield prospect Khalil Lee to the New York Mets, who in turn traded right-hander Josh Winckowski to Boston as part of the maneuver.

ESPN reported Friday that per the complicated arrangement, the Red Sox also provided $2.8 million to the Royals to help with a portion of Benintendi’s $6.6 million salary. Benintendi, who turns 27 next month, is in the last year of a two-year, $10 million contract. 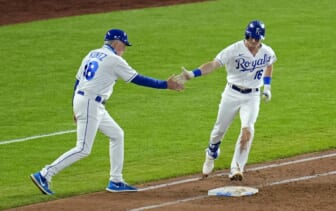 All of the prospects Boston picked up Friday are still in the lower rungs of the minor leagues, as none have yet reached the Double-A level.

De La Rosa, 18, was the Royals’ pitcher of the year for their Dominican Summer League team two years ago when he was only 16 years old.

Valdez, 19, debuted with the Mets’ Dominican Summer League team in 2019 and was the team’s No. 14 prospect, per MLB.com.

Benintendi entered Friday hitting .292 with five homers and 24 RBIs in 51 games for Kansas City this season.