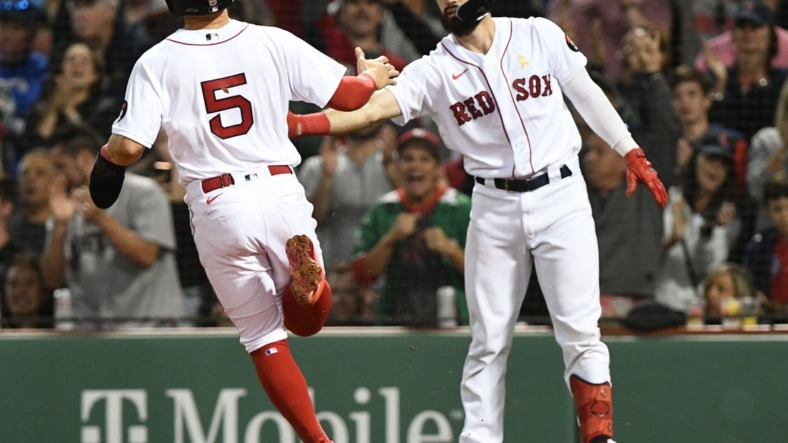 The Boston Red Sox will look for their third victory to start a four-game set against the visiting Texas Rangers on Saturday after emerging victorious in walk-off and blowout fashions in the first two games.

Boston banged out 13 hits and had eight two-out RBIs in a 9-1 win on Friday, its third straight victory overall dating back to the Wednesday series finale at Minnesota. The Red Sox won the series opener against Texas 9-8 on Thursday.

“If you can continue to be tough outs, you’re going to make it tough on all their pitchers,” Boston catcher Connor Wong said after the Thursday win. “It was fun to be a part of.”

One of those two-out hits was the most memorable as Wong capped the scoring with his first career major league home run, a two-run shot in the seventh inning.

Wong, who played in six big-league games last season and five earlier this year, was recalled from Triple-A Worcester on Thursday. He led the International League with nine long balls in August.

Boston’s Xander Bogaerts produced his sixth straight multi-hit game, and Rafael Devers went 2-for-2 with two walks. Devers has reached base in six consecutive plate appearances since snapping an 0-for-24 stretch on Thursday.

The Red Sox organization’s top-ranked pitching prospect, Brayan Bello (0-4, 7.27 ERA) has shown improvement of late, but he is still looking for his first win. He will try to get it Saturday in his initial appearance against Texas.

Bello has a 4.50 ERA over his past four outings (two starts) after struggling to the tune of a 10.50 mark over his first four starts. His past two starts have come since he returned from the injured list on Aug. 24 after recovering from a left groin strain.

He worked four-plus innings of three-run ball Monday against the Twins, allowing just one run over the first four complete frames. The bullpen was unable to strand inherited runners after a pair of walks, surrendering a two-run double to Gio Urshela in the fifth inning, and Bello was saddled with a 4-2 loss.

“I was pretty upset because I was controlling the game,” Bello said. “I was in the game and I was getting outs, and those two walks got me out of my game. I felt I was doing well and I was going along with the game real well. It just got me.”

Bello has just five starts under his belt. Each is a learning experience.

“It’s tough,” Cora said. “He needs to be more aggressive in the zone. … He’s going to learn and keep moving forward.”

The Rangers are a season-low 15 games below .500 after dropping their sixth straight game on Friday. They still got multiple hits from Nathaniel Lowe for the seventh time in eight games, as well as another RBI from Corey Seager. He has eight RBIs in the past five games.

Without an announced starting pitcher for Saturday, Texas will have to rely heavily on its bullpen.

In the Friday loss, A.J. Alexy worked through 2 1/3 innings after Dallas Keuchel struggled through the first 4 2/3.

“It helped us out,” interim manager Tony Beasley said of Alexy’s outing. “We had some scenarios that could have played out differently. I don’t know if I actually went in the right direction with that, but it did get us through the end of the game.”

Beasley hopes for a more complete effort on Saturday to snap the team’s season-worst skid.

“We need to get a good outing,” he said. “There will be multiple pitchers used, probably, but get some offense going, play a good game and close a game out. We had a chance to win a ballgame (on Thursday), and then (Friday) didn’t go our way.”