RECAP: Sacramento Kings come from beyond to top Pelicans 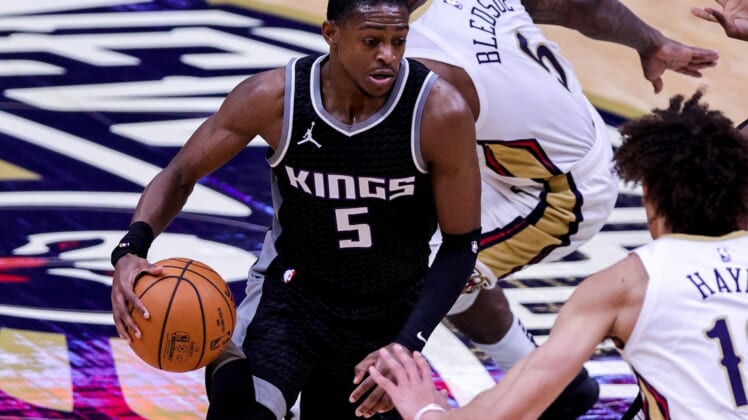 Brandon Ingram scored 20 points to lead the Pelicans, and Josh Hart added 15 points and 13 rebounds. Zion Williamson scored 17, Eric Bledsoe and Lonzo Ball each had 14, and Willy Hernangomez had 13 points and 11 rebounds.

The Pelicans led by two points at halftime but missed their first eight shots of the third quarter before Barnes’ 3-pointer gave the Kings a 66-65 lead.

The lead changed hands seven times before the Pelicans scored seven straight, concluding with Ball’s basket that gave the hosts an 81-74 lead.

New Orleans increased the gap to 10 points, but Barnes scored nine of his 14 points in the quarter down the stretch as Sacramento got within 94-87 at the end of the period.

New Orleans again went up by 10, but Barnes, Hield and Fox each made a 3-pointer and Holmes converted a three-point play as the Kings grabbed a 103-100 lead midway through the fourth quarter.

The lead changed hands four more times, the last coming on a basket by Fox. He added two free throws and a layup to give Sacramento a 111-106 edge with 1:57 left.

Ingram made a free throw, but Fox answered with consecutive baskets to put the game away.

Fox scored 12 points as Sacramento led for much of the first quarter, but New Orleans made a late push to grab a 33-30 lead at the end of the period.

The score was tied midway through the second quarter before Ingram led a run as the Pelicans took a 58-51 lead.

The Kings scored four points on their final possession, with a technical-foul free throw and a 3-pointer, as they trimmed New Orleans’ lead to 62-60 heading to halftime.