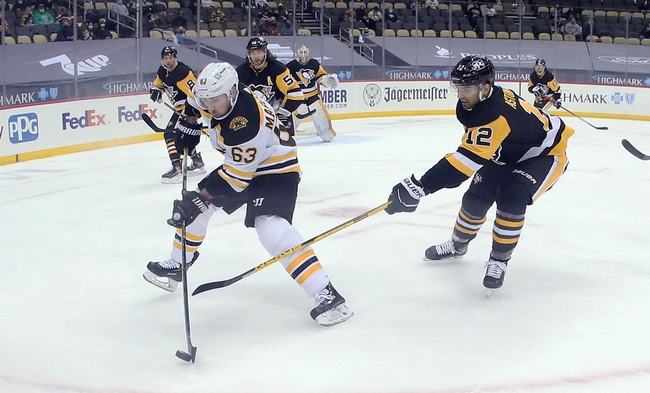 Sidney Crosby had a goal and two assists, Evgeni Malkin and Jake Guentzel a goal and an assist each Monday, helping the Pittsburgh Penguins extend their winning streak to six games, 4-1 over the visiting Boston Bruins.

Evan Rodrigues also scored for the Penguins, who improved to 12-2-0 at home.

Matt Grzelcyk scored for Boston, which has lost five of its past seven games. Jaroslav Halak stopped 22 of 25 Pittsburgh shots.

Pittsburgh winger Brandon Tanev left in the third period after taking a shot off his left wrist.

After a game that at times got chippy with some pushing and shoving, the teams have a rematch Tuesday, again in Pittsburgh.

Boston racked up 20 shots in the first but couldn’t come out of the period with a lead.

The Bruins opened the scoring with a power-play goal at 6:47 of the first. Grzelcyk’s wrist shot from the center point eluded Jarry as Nick Ritchie served as a screen just above the crease. It was Grzelcyk’s first goal of the season.

Rodrigues tied it at 16:51 of the first. After Boston’s Brad Marchand overskated the puck in the neutral zone, Pittsburgh’s Kasperi Kapanen jumped on it. He got the puck to Rodrigues, who was unguarded and whose shot from the left-wing boards knuckled in off Halak’s glove.

With 1:26 left in the first, Crosby gave the Penguins a 2-1 lead. On a give-and-go with Guentzel off the rush, Crosby threaded a severe-angle shot from Halak’s left inside the near post for his team-leading 11th goal and his fourth goal in five games.

At 11:40 of the second during a Pittsburgh power play and against the Bruins’ top-ranked penalty kill, Malkin made it 3-1 and picked up his 1,100th career point. From the right hash marks, Malkin beat Halak short side.