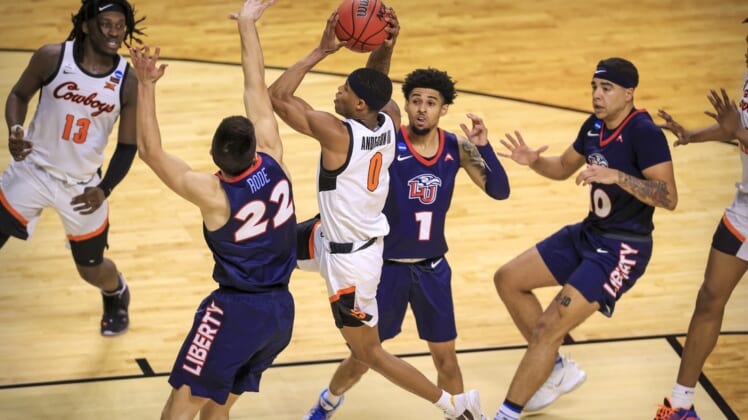 Avery Anderson III scored a game-high 21 points as fourth-seeded Oklahoma State overcame a poor shooting night from freshman sensation Cade Cunningham to defeat No. 13-seeded Liberty 69-60 Friday in the opening round of the Midwest Regional at Farmers Coliseum in Indianapolis.

Cunningham, the Big 12 Conference player of the year and the probable No. 1 overall pick in the next NBA draft, was limited to 15 points on 3-for-14 shooting from the field and committed a team-high four turnovers. He scored nine points in the final 2:58, however, making a 3-pointer and all six of his free-throw attempts in that span, to help clinch the victory.

Matthew-Alexander Moncrieffe scored 10 points and Isaac Likekele added nine for the Cowboys (21-8), who will meet No. 12-seed Oregon State, a 70-56 upset winner over No. 5 Tennessee, on Sunday in the Round of 32.

Cunningham’s first field goal came on a layup with 15:25 remaining that snapped a tie at 35 and gave the Cowboys their first lead since the 13:54 mark of the first half.

Cunningham made a 3-pointer with 13:28 left that broke a 39-all tie and sparked an 8-0 OSU run over the next minute. The Flames never got closer than three points the rest of the way.

Neither team led by more than six points in a tightly contested first half, in which the Flames finished with a 30-27 lead as Preston scored nine points and McGhee had eight.

The Cowboys might have been out of it if not for Anderson’s 14 points in the half.

Cunningham had just one point on 0-for-5 shooting before the intermission, missing three 3-point attempts, committing three turnovers and two personal fouls.

The Cowboys took an 8-4 lead after five minutes, but Liberty responded with an 8-0 run, capped by Parker’s 3-pointer with 12:33 left, and maintained the advantage for the rest of the half. The Flames took their largest lead of the half, 25-19, on a McGhee 3-pointer with 3:27 to go.