RECAP: Nuggets rally from 19 down to dump Thunder 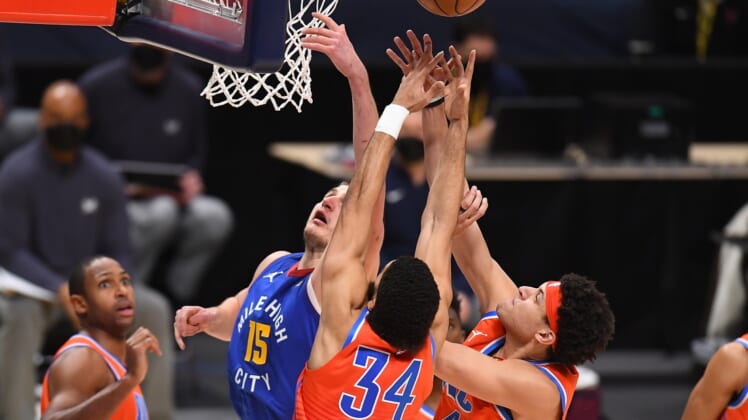 Justin Jackson scored 20 points, Hamidou Diallo and Al Horford added 16 each and Luguentz Dort finished with 15 for the Thunder.

Oklahoma City withstood an early second half surge by the Nuggets to go up 66-51 on a 3-pointer by Kenrich Williams about midway through the third. Porter scored nine points and Millsap had four in a 13-4 run that got Denver within six late in the quarter.

Jackson’s three-point play and 3-pointer extended the lead back to 79-67. but Diallo’s goaltending on Murray’s desperation heave from half-court at the buzzer made it 79-70 heading into the fourth.

The lead was 10 before Monte Morris hit a layup and a 3-pointer and Millsap also scored on a layup. Horford split a pair of free throws for the Thunder, but Millsap’s layup made it 83-81.

Dort and Diallo hit consecutive layups and Diallo made two free throws to stretch the advantage to eight with about 4 1/2 minutes left.

Murray hit a floater in the lane and Barton drained a 3-pointer to get the Nuggets within 89-86 with 3:17 left.

Both teams had empty possessions before Porter’s short jumper made it a one-point game, and after a shot clock violation by Oklahoma City, Jokic hit a 15-footer to give Denver its first lead with 1:21 left.

Horford missed from deep on the ensuing possession, and Barton drained a 3-pointer to give the Nuggets a 93-89 lead with 42 seconds left.

Darius Bazley hit two free throws with 16.5 seconds left to pull the Thunder within 93-91, but the Nuggets were able to finish it at the line.

The Thunder led by as many as 19 late in the first half, but Jokic scored seven of his 16 first-half points in the final minutes to Nuggets get within 53-40 at the break.