Frank Harris hit Oscar Cardenas on a 1-yard touchdown pass on the final play of the game as No. 22 Texas-San Antonio needed a miracle finish to defeat Alabama-Birmingham 34-31 on Saturday afternoon in a key Conference USA game in San Antonio and remain undefeated.

The Roadrunners took over at their own 23-yard line with 1:06 remaining and no time outs, trailing by four points. Harris completed passes of 28 yards to Cardenas and 6 and 33 yards to De’Corian Clark, the latter to reach the UAB 10-yard line.

After a 9-yard run by Harris and an incomplete pass, Harris connected with Cardenas for the game winner as the clock expired.

Harris ended up with 323 yards and three TDs passing, with Sincere McCormick rushing for 65 yards and a score, and Zakhari Franklin catching six passes for 97 yards and two touchdowns.

Dylan Hopkins passed for 254 yards and two touchdowns for the Blazers (7-4, 5-2), who had a two-game winning streak snapped. DeWayn McBride ran for 144 yards and the go-head score with 5:16 to play, forcing UTSA into its comeback. 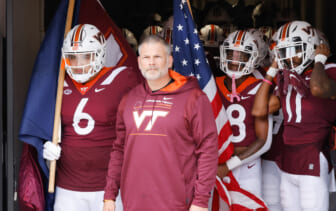 The Blazers wasted no time setting the table, with Hopkins hitting Tre Shropshire on a 74-yard TD bomb on the game’s second snap. Harris and McCormick responded by engineering a 12-play, 73-yard drive that ended with a 15-yard one-handed touchdown catch by Franklin.

Hopkins and Shropshire connected again near the end of the first quarter, this time from 40 yards away before McCormick rambled into the end zone on an 8-yard run to retie the game with 10:24 to play in the second quarter.

Hopkins then capped a 75-yard, eight-play drive with an 8-yard scoring run.

UTSA’s Hunter Duplessis and UAB’s Matt Quinn traded field goals, from 51 and 23 yards, respectively, over the final 2:18 of the quarter as the Blazers carried a 24-17 lead into the break.

The Roadrunners went to the quick-strike big-play 51 seconds into the third quarter as Harris passed 54 yards to Franklin for the tying TD. Duplessis booted a 49-yard field goal with 1:21 to play in the third quarter to take the lead for the first time.