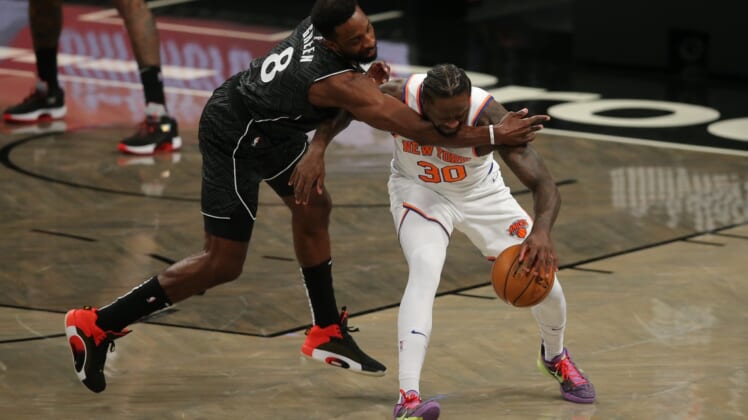 Kyrie Irving scored 34 points, James Harden posted another triple-double with 21 points, 15 rebounds and 15 assists as the host Brooklyn Nets held on for a 117-112 victory over the New York Knicks Monday night in New York.

Irving scored nine points in the fourth quarter when the Nets struggled to secure their 13th win in 14 games.

Harden entered the fourth quarter with one rebound shy of the triple-double and got his 10th triple-double with the Nets 41 seconds into the fourth when he rebounded a missed 3-pointer by Alec Burks.

Despite the big night from Irving and Harden’s latest triple-double, the Nets struggled to put away the Knicks until the final minutes. Brooklyn took a 96-84 lead into the fourth but the Knicks hung around throughout the final 12 minutes.

After the lengthy review ruled Burks stole the ball from Joe Harris, Randle won a tip from Jeff Green and New York called a timeout with 5.7 seconds left. However, Randle was called for traveling on a pump fake at the 3-point line with 3.2 seconds left and Harden finished it off at the line with six-tenths of a second remaining.

After Harden finished it off, Randle had to be restrained by New York executive William Wesley and tossed a chair in disgust as he headed to the locker room.