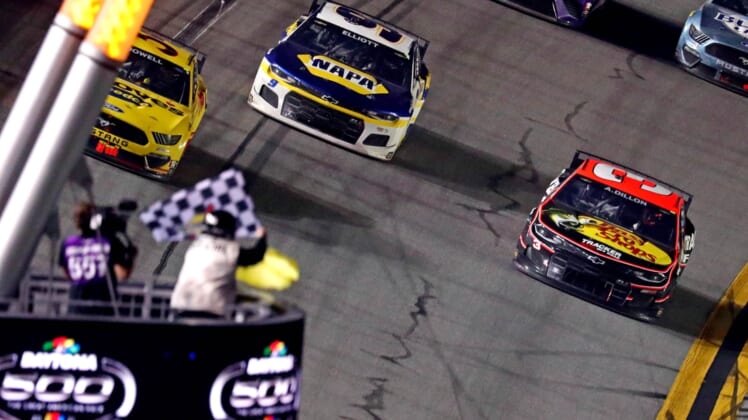 Michael McDowell emerged from an ugly final-lap wreck to take the lead and went on to win Sunday’s weather- and crash-delayed running of the Daytona 500 at Daytona International Speedway.

The victory was McDowell’s first in the NASCAR Cup Series in 357 starts.

“I just can’t believe it,” McDowell, 36, said. “So many years just grinding it out hoping for an opportunity like this.”

McDowell led just the one lap.

Did it match the dream?

“It does,” he said, “but whether I win this race or not it’s not what defines you. It’s unbelievable and I’m so thankful, but I’m thankful to have a happy, healthy family and a beautiful wife and a great family. Not everybody makes it to victory lane and for 14 years I didn’t, so just to be here now is just so amazing.”

The Front Row Motorsports driver was running third behind Team Penske teammates Joey Logano and Brad Keselowski on the final lap when he bumped Keselowski from behind, who then hit Logano and sent both into spinning, flaming wrecks that took out both cars and a couple of others.

WATCH: NASCAR honors Dale Earnhardt at Daytona 500 on 20th anniversary of his death

“Wanted to make the pass to win the Daytona 500 and it ended up really bad,” Keselowski said. “I don’t feel I made a mistake but I can’t drive everybody else’s car. Frustrating.”

Rounding out the top five were Kevin Harvick (Ford) of Stewart-Haas Racing and Denny Hamlin (Toyota) of Joe Gibbs Racing.

Hamlin was attempting to become the first driver in history to win three straight 500s, and for much of the race it appeared he just might as he led a race-best 98 laps of the 200-lap race.

But after the final green flag pit stop of the night, a line of five Fords working in concert blew past Hamlin’s Toyota to end his bid.

The race marked the debut of the 23XI team owned by basketball superstar Michael Jordan and Hamlin, driven by Bubba Wallace. Wallace finished 17th but ran near the front for much of the second stage and led one lap.

Just 15 of 200 laps had been run when a lightning strike near the speedway caused the red flag to be waved. Minutes later heavy rain began to fall.

The race would not restart until five hours and 40 minutes later.

The weather was not the only problem for a large cluster of teams and drivers who were considered to be contenders for victory in NASCAR’s most important race.

The wreck began when Christopher Bell of Joe Gibbs Racing bump-drafted Almirola and spun him out near the front of the field.

“We were just getting pushed too hard too early,” Stewart-Haas Racing’s Almirola said. “It’s a long, long race. Man, we were in a fine position, just sitting there riding around in the top two, three and the 20 just came with a big run and hit me really hard in a bad spot and it turned me to the right and tore up our race car and ended our Daytona 500 way too early.”

Newman said, “I had the wreck missed, but got hit from some place and that was the end of our day.”

Bowman started the race from the pole and was running in the top three when the wreck occurred.

“Hate that superspeedway racing works out that way sometimes,” the Hendrick Motorsports driver said, “but that’s just part of the game.”