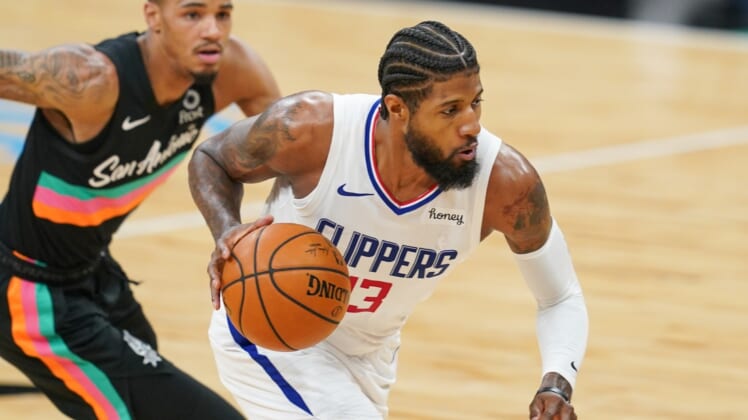 Reggie Jackson scored a season-high 28 points, and Paul George scored 24 points and took down 13 rebounds to help the shorthanded Los Angeles Clippers to a 98-85 win over the San Antonio Spurs on Thursday in the second game of a back-to-back between the two teams in the Alamo City.

The win was Los Angeles’ fourth straight games and fifth in their past six games. The Clippers are now 12-4 in back-to-backs this season, and 8-0 in the second game, including 6-0 on the road.

The Clippers beat San Antonio 134-101 in Wednesday’s game, handing the Spurs their worst home loss in franchise history. But Los Angeles played the second game without Kawhi Leonard and Marcus Morris, who missed the game with foot and thigh injuries, respectively; the pair combined for 45 points in the first game of the back-to-back.

George, Jackson and Terance Mann (10 points and 12 rebounds) were more than up to the task, taking turns helping the Clippers overcome a six-point halftime deficit despite shooting just 38.2 percent from the floor. Los Angeles made up for its shooting woes by outrebounding the Spurs 64-43, including a 14-3 edge on the offensive glass.

The Clippers led 47-42 after a dunk by Amir Coffee at the 4:17 mark of the second quarter before San Antonio roared back, scoring the 13 of the half’s final 15 points to jump to a 55-49 advantage at the break.

DeRozan led all scorers with 15 points over the first two periods. Jackson paced Los Angeles with 12 points at the half, with George hitting for 11.

The Clippers found their groove again in the third period as George scored 10 straight points and Mann had eight in the quarter to move back in front at 72-68 heading to the final 12 minutes.

The Clippers also were without Patrick Beverley (right knee soreness) for the seventh straight game and Serge Ibaka, who has battled tightness in his lower back, for the sixth.