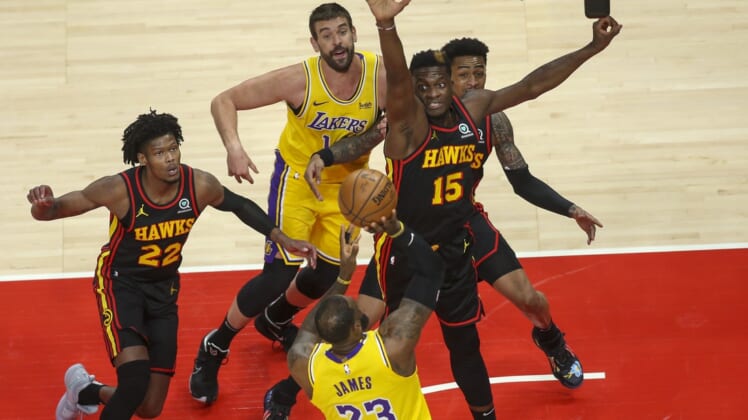 LeBron James scored 21 points, including the final nine points of the game for the Lakers, and made a crucial defensive play to help visiting Los Angeles hold off the Atlanta Hawks 107-99 on Monday.

Atlanta had cut a 10-point deficit to one point when James made a 3-pointer with 1:12 left to regain the momentum. James then came from behind to block Clint Capela’s shot and made a basket at the other end to push the lead back to six. James was 4-for-4 at the line in the final 19 seconds to secure the win.

Anthony Davis led the Lakers with 25 points and Dennis Schroder scored 16 against his former team. The Lakers were 5-2 on the road trip and have won two straight.

The Hawks got 25 points and a season-high 16 assists from Trae Young, 22 points from John Collins and 16 points and 13 rebounds from Capela.

Neither team was able to take control in the first half, with the Lakers leading by as many as seven and the Hawks by four. Los Angeles was up 28-25 after one quarter and took a 50-46 lead into halftime thanks to a late 3-pointer by Kentavious Caldwell-Pope.

The Lakers scored the first five points of the second half and led 55-46 after another Caldwell-Pope 3-pointer. But Atlanta came back to tie the game at 66-66 on two Danilo Gallinari 3-pointers and led by as many as six when Solomon Hill dropped in a 3-pointer with 2:01 left to make it 76-70. The Hawks took a 76-75 lead into the fourth quarter.

The Lakers appeared to have taken control of the game with a 16-0 run that began in the third quarter. James and Kyle Kuzma hit back-to-back 3s and Alex Caruso added a slam for an 86-76 lead with 8:52 remaining. The Hawks got to within one point when Young hit a 3-pointer from just inside halfcourt to make it 98-97.

The Hawks were playing without De’Andre Hunter, the team’s second-leading scorer, because of discomfort in his right knee. Hunter underwent an undisclosed non-surgical procedure on Saturday.