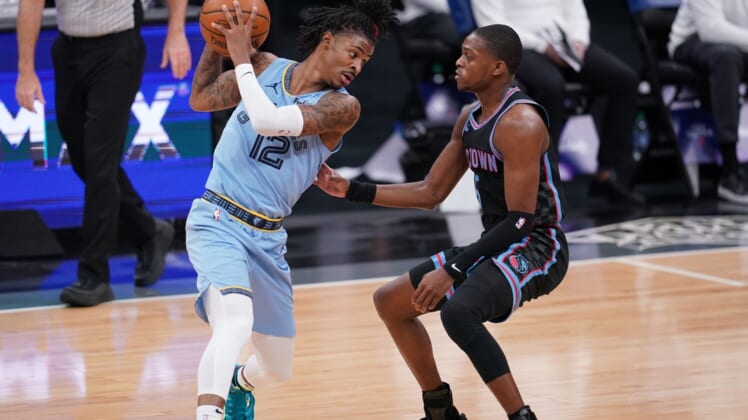 Jonas Valanciunas scored 25 points on 11-of-14 shooting and collected 13 rebounds to help the Memphis Grizzlies cruise to a 124-110 victory over the host Sacramento Kings on Sunday night.

Dillon Brooks scored 22 points and Kyle Anderson added 17 to go with a season-best four steals as the Grizzlies won for just the second time in the past seven games.

De’Aaron Fox recorded 23 points and nine assists for the Kings after missing one game due to a knee injury.

The Grizzlies shot 53.2 percent from the field, including 9 of 21 from 3-point range.

Sacramento shot 50 percent overall but was a dismal 8 of 33 from 3-point range.

The Kings trailed by 24 late in the third quarter before narrowing the gap to 114-103 on a three-point play by Glenn Robinson III with 4:38 remaining in the game.

Sacramento later crept within 10 before Morant knocked down a jumper and Valanciunas scored two inside baskets to give the Grizzlies a 124-108 lead with 1:22 left en route to closing it out.

Harrison Barnes scored the game’s first basket for the Kings before Memphis rolled off 13 straight points and never trailed again.

The Grizzlies boosted their advantage to 20 points when John Konchar made two free throws to make it 92-72 with 2:44 left in the third quarter. Anderson and Konchar followed with baskets to increase the margin to 24 before Memphis took a 99-79 lead into the final stanza.