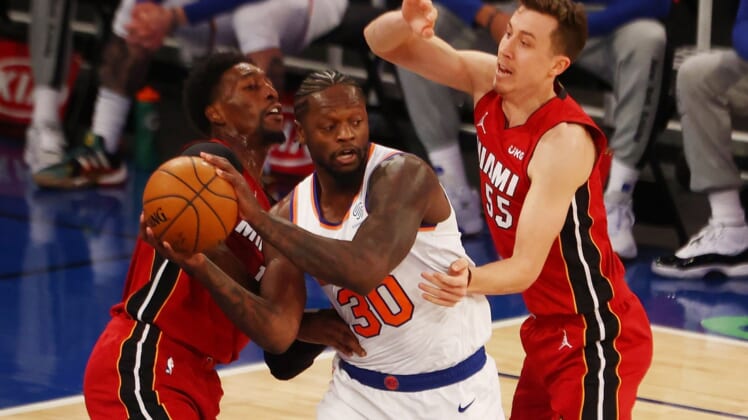 Jimmy Butler scored eight points in the fourth quarter and hit the tie-breaking jumper with 4:18 left Sunday afternoon as the visiting Miami Heat held off the New York Knicks in a 109-103 win.

Butler (17 points, 10 rebounds and nine assists) just missed a triple-double while Bam Adebayo (24 points and 11 rebounds) also had a double-double for the Heat, which has won two straight for just the second time this season. Kendrick Nunn and Tyler Herro each scored 16 points while Kelly Olynyk (15 points) and Duncan Robinson (12 points) each got into double digits.

Julius Randle had 26 points and 13 rebounds for the Knicks, whose two-game winning streak was snapped. Reggie Bullock hit seven 3-pointers on his way to 21 points while Alec Burks had 13 points off the bench.

Bullock drained a trio of 3-pointers as the Knicks opened the game on a 15-5 run. The Heat responded with a 16-3 run — Bullock hit another 3-pointer for New York’s only points — in which Nunn hit two 3-pointers, including the tie-breaking trey that gave Miami a 21-18 lead.

The Heat led 25-23 after one and held a trio of five-point leads before the Knicks went on an 8-0 run to go ahead 43-39 in the second. The teams were tied three times and traded the lead seven times before Butler’s driving layup with 42.2 seconds left gave Miami a 60-59 lead at the half.

The Heat never trailed again after Robinson’s 3-pointer snapped a 69-69 tie with 6:56 left in the third. Miami took its biggest lead to that point at 80-73 following a pair of free throws by Butler with 2:24 remaining.

The Knicks got within two points three times in the fourth before Immanuel Quickley hit a pair of free throws to tie the score at 86-86 with 9:31 left. New York tied the score three more times and had a chance to take the lead with 4:35 left, but Austin Rivers missed a 3-pointer.

Butler hit the go-ahead jumper on the next trip up the floor. Elfrid Payton missed a driving layup and Butler hit two free throws after being fouled by Rivers to extend the lead to 98-94. The Knicks pulled within two points twice more, but Randle and Burks each missed 3-pointers before Herro sank a 3-pointer to lengthen the lead to 106-99 with 33.4 seconds left.