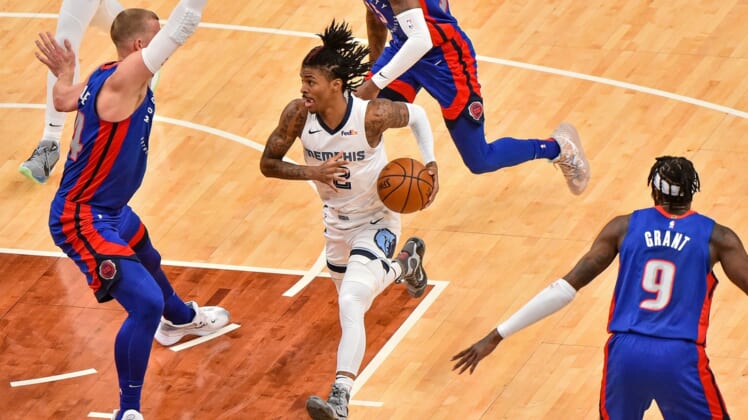 Ja Morant had 29 points and the Memphis Grizzlies opened up a 21-point lead in the first half and went on to a 109-95 victory over the visiting Detroit Pistons on Friday.

Jonas Valanciunas powered for 17 points and 15 rebounds and Kyle Anderson had 16 points. Brandon Clarke added 12 points with seven rebounds, and Desmond Bane chipped in 10 points off the bench for Memphis.

Detroit’s Jerami Grant, who scored a career-high 43 against Chicago on Thursday, was limited to 16 points on 5-for-20 shooting. Delon Wright also had 16 points and Josh Jackson tossed in 15 with seven rebounds.

Saddiq Bey added 14 points and Mason Plumlee posted 10 points, 15 rebounds and six assists but also was responsible for six of the Pistons’ 21 turnovers.
The Pistons were fortunate to be down just 10, 53-43, at halftime. They shot 38.6 percent from the field and committed 11 turnovers.

Valanciunas led the Grizzlies with 11 points and nine rebounds, including five on the offensive end in the half.

Memphis raced to a 35-17 lead through one quarter and twice extended the lead to 21 points early in the second quarter. A 19-6 run allowed the Pistons to close the gap as Wright scored eight points and dished out two assists during that stretch.

Bey hit a pair of 3-pointers during a 14-3 Detroit run early in the second half that cut Memphis’ lead to 58-57.
The Grizzlies answered with a 12-3 spurt that included seven points from Morant.

An Anderson layup late in the quarter nudged Memphis’ advantage to 14 points. The Grizzlies were up 11, 84-73, heading into the fourth.
Wright had five points and an assist in the first three minutes of the quarter to pull Detroit within six, 88-82. He soon departed with a groin strain.

When Plumlee scored inside midway through the quarter, the Grizzlies advantage was once again down to one.
Bane scored five consecutive points to shift the momentum.

Morant soon had an eight-point run of his own, including six free throws, to clinch the victory.