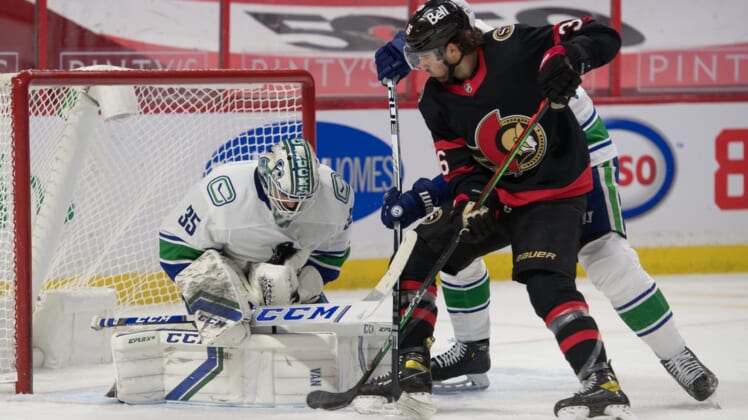 J.T. Miller scored at 1:40 of overtime and Thatcher Demko made 44 saves as the Vancouver Canucks defeated the host Ottawa Senators 3-2 Monday night.

Jayce Hawryluk and Tanner Pearson also scored for the Canucks, who have won five of their past six games despite the absence of first-line center Elias Pettersson (upper-body injury). Coach Travis Green said Pettersson wouldn’t join the Canucks on their current four-game trip, which got underway Monday.

Josh Norris and Colin White scored for the Senators and goaltender Joey Daccord, who posted his first NHL victory with a 4-3 decision against visiting Toronto the previous night, stopped 25 of 28 shots.

Miller’s winner came after he took a pass from Quinn Hughes just outside the Senators’ blue line while they were making a line change. Miller sped past a defender as he crossed the blue line and beat a sprawling Daccord with a forehand from close range.

The Senators rallied from a 2-0 first-period deficit, tying the score on White’s goal at 17:50 of the third period. With Daccord on the bench for an extra attacker, Demko tried to move the puck along the boards from behind his own net. Ottawa’s Brady Tkachuk beat a defenseman to the puck and fired to White in the high slot for a one-timer to make it 2-2.

White’s goal made up for a bad turnover on Vancouver’s second goal at 18:49 of the first. Four players — two from each team — were jostling for the puck behind the Ottawa net when White scooped a backhander off the boards and right in front of his own net, where a wide-open Pearson hammered it home.

Hawryluk’s first goal of the season, after a mad scramble in front of the net, opened the scoring at 10:14 of the first.

The Senators pulled within 2-1 at 3:52 of the second, with Norris scoring off the rebound of a shot by Tim Stutzle.

Demko improved to 6-1-0 over his past seven starts.