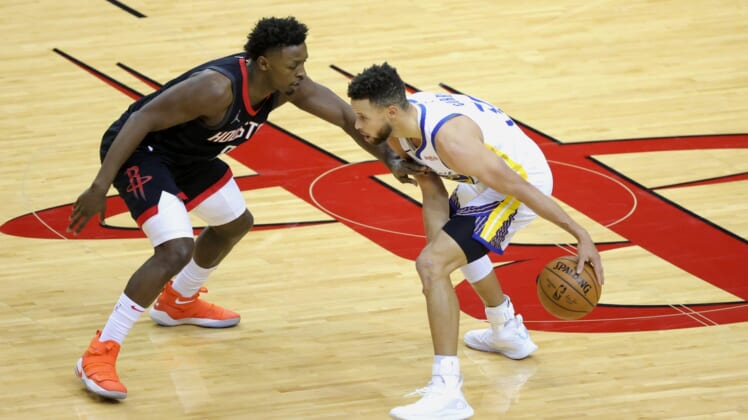 Jordan Poole scored 23 points and drilled six 3-pointers off the bench as the visiting Golden State Warriors cruised to a 108-94 victory over the Houston Rockets, who took a franchise-record 18th consecutive defeat.

Kelly Ourbe Jr. added 19 points, Andrew Wiggins had 17 points and Draymond Green added a triple-double of 16 points, 12 rebounds and 10 assists for Golden State. The Warriors received 18 points and eight assists from Stephen Curry — who missed 9 of 11 3-point attempts — before he limped to the locker room at the conclusion of the third quarter.

The Rockets trailed by as many as 26 points in the second half. Houston welcomed back Christian Wood (21 points, nine rebounds), who missed the previous 17 games with an ankle sprain, and Danuel House Jr. (11 points), but neither could help the Rockets end their skid.

Kevin Porter Jr. led the Rockets with 25 points and seven assists. Houston closed to within 14 points multiple times in the second half but failed to muster a serious threat.

There were four lead changes early in the first quarter before the Warriors grabbed a 29-21 advantage with an 11-0 run that started with seven consecutive points from Wiggins. Curry and Wiggins combined for 20 first-quarter points to pace Golden State to a 31-27 lead entering the second period, at which time Poole took over with his perimeter marksmanship.

Poole followed Wiggins’ 3-pointer with his third trey of the second to extend the lead to 52-37 with 4:10 left in the half. Golden State was off and running from the juncture, with Green adding a three-point play before Poole hit his fourth 3-pointer of the period.

When Poole completed a three-point play at the 2:13 mark, the Warriors led 63-42 en route to a 24-point halftime lead.

Poole, who never got off the bench in the first quarter, scored 15 in the second to match Wiggins’ output prior to the break. Porter had 13 first-half points.