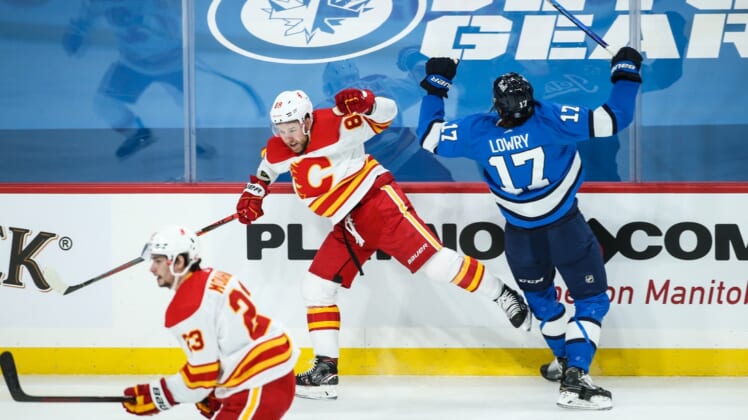 Johnny Gaudreau scored once in regulation and then added the shootout winner to lead the Calgary Flames to a 4-3 road win over the Winnipeg Jets on Monday night.

With the chance to win it in the fourth round of the shootout, Gaudreau used his slick hands and several dekes before depositing the puck.

Jacob Markstrom made 25 saves for the Flames through overtime, and then stopped three of four Jets in the shootout.

The clubs will meet for the second time in a three-game set on Tuesday, and will have a whale of a game to top.

Kyle Connor staked the Jets to a 2-0 lead with a pair of first-period power-play goals. Connor opened the scoring with a pinpoint wrist shot from the right face-off dot at the 4:31 mark. After taking a cross-ice feed from Mark Scheifele, Connor wired a short-side, top-shelf effort.

He doubled the lead with another man-advantage marker from almost the exact same spot, blasting a one-timer after the pass from Josh Morrissey at 13:46 for his sixth goal of the season.

However, the Flames battled back to take a third-period lead. Chris Tanev put the Flames on the board with a lucky goal just seven seconds into the second period, his first goal with the Flames. Upon getting the puck from the face-off to start the period, Tanev simply sent a long shot toward the Jets net. The bounding puck — from 122 feet away, officially — eluded goalie Connor Hellebuyck.

Then, Gaudreau tied the game and extended his season-long point-scoring streak to eight games. Juuso Valimaki sent a dart of a cross-ice pass to Gaudreau as he went to the net and it was an easy redirect for Gaudreau to net his sixth goal of the season at 6:54 of the third period.

After drawing even, the Flames were dominating play and took the lead when Andrew Mangiapane netted his first goal of the season to finish a series of scoring-chance generating shifts. During a scramble, Mangiapane had the presence to kick a puck from his feet and slid home the puck at the 13:45 mark.

But with the goalie pulled for an extra attacker, Scheifele’s game-tying tally came with 1:50 remaining in regulation. Scheifele deflected a Neal Pionk point shot

Hellebuyck stopped 25 shots through overtime for the Jets, who got a three-point night from Blake Wheeler.