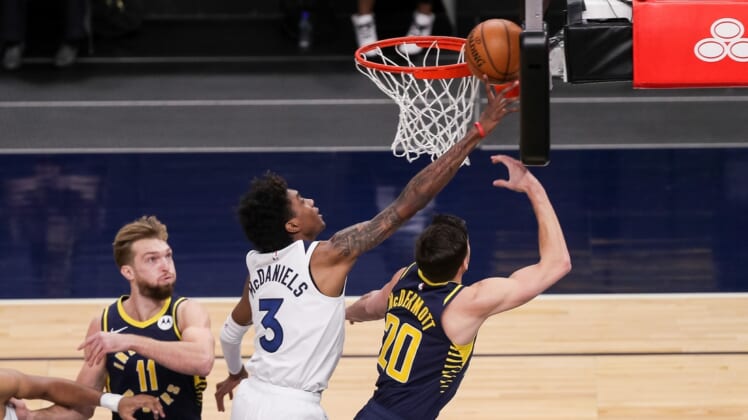 Domantas Sabonis recorded 36 points, 17 rebounds and 10 assists, and the Indiana Pacers rallied for a 134-128 overtime win against the Minnesota Timberwolves on Wednesday in Minneapolis.

Malcolm Brogdon added 32 points, nine rebounds and seven assists for the Pacers, who won for the third time in four games.

After giving up 40 second-quarter points, Indiana trailed for most of the second half.

Malik Beasley came off Minnesota’s bench to score a team-high 31 points. Karl-Anthony Towns finished with 30 points and 10 rebounds while Ricky Rubio added 20 points and 13 assists, but the Timberwolves still lost for the sixth time in seven games.

A 10-4 Minnesota run spanning 1:23 gave the Timberwolves a 121-116 lead with 58.9 seconds left after Towns put in a 3-pointer and a basket in the paint, both off Rubio assists. However, a Jeremy Lamb 3-pointer, a Sabonis rebound and then a pair of Sabonis free throws forced overtime.

Minnesota rookie Anthony Edwards had a look at the would-be game-winner but missed his 3-point attempt at the buzzer. Edwards finished with eight points on 3-of-15 shooting.

Brogdon and Sabonis scored the first five points of the extra frame, then Brogdon made the last of his six 3-pointers with 9.8 seconds remaining to seal the win.

Brogdon went 6-of-7 from beyond the arc to lead Indiana on a 13-of-26 night from long range. Lamb scored 18 points off the Pacers’ bench, and reserve Aaron Holiday added 15 points.

The Pacers shot 50.5 percent from the floor while the Timberwolves hit just 42.1 percent of their field-goal attempts, and Indiana had a 51-44 edge in rebounding. Minnesota made just 15 of 40 attempts from 3-point range.