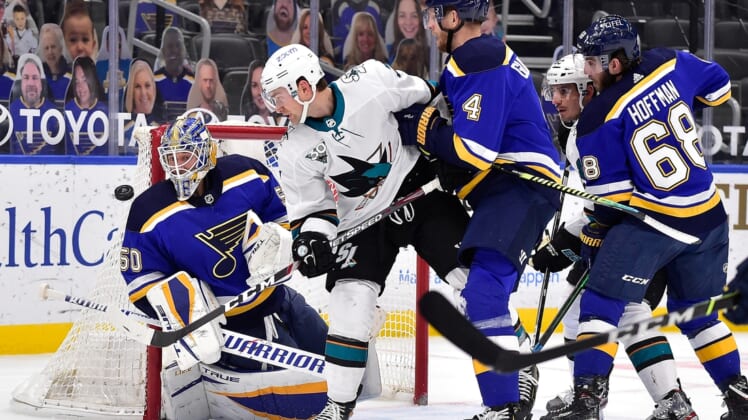 David Perron scored on an overtime power play to cap a three-point night, lifting the St. Louis Blues to a 3-2, come-from-behind win over the visiting San Jose Sharks on Thursday.

Brayden Schenn produced the game-tying goal for the Blues with 40 seconds left in regulation to force OT.

The Blues went on a power play 3:21 into the extra session when the Sharks’ Patrick Marleau was whistled for hooking. Torey Krug got loose with a toe-drag move, then fed Perron at the right post for the decisive goal.

Mike Hoffman had a goal and an assist for the Blues, and Perron logged two assists. Jordan Binnington stopped 30 of 32 shots to earn the victory.

John Leonard and Noah Gregor scored for the Sharks, and Martin Jones made 42 saves.

The Blues scored the first period’s only goal on a power play. Jones stopped Oskar Sundqvist’s shot inside the left post, but Hoffman arrived from the right circle to convert the rebound 6:12 into the game.

The Sharks outshot the Blues 12-8 in the second period and took a 2-1 lead.

Gregor tied the game at 8:27 of the period. Nicolas Meloche threw the puck at the net from the right point, and Gregor buried a sharp-angle follow shot on the weak side.

After the Sharks won a scrambled draw in the right circle, Ryan Donato fanned on a shot but moved the puck to Leonard, who beat Binnington from point-blank range with 5:29 left in the period.

Leonard has scored the first two goals of his NHL career the past two games.

With Binnngton pulled for an extra attacker in the final minute, the Blues tied the game playing six-on-five. Hoffman shot the puck from the right circle and Schenn drove the net to convert the rebound.

On the down side for the Blues, their already depleted forward corps took another hit when Ivan Barbashev was knocked out of the game with a lower-body injury.