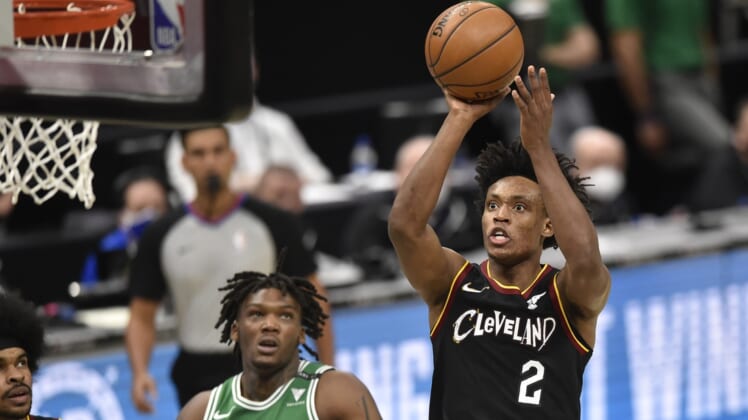 Collin Sexton finished with 29 points, seven rebounds and six assists to help the host Cleveland Cavaliers hold off the Boston Celtics in a 117-110 victory on Wednesday night.

Sexton shot 10-for-20 from the field and a perfect 7-for-7 from the free-throw line while Darius Garland had 25 points on 9-for-16 shooting as the Cavaliers snapped a four-game losing streak.

The Celtics, who lost for the third time in their past four games, trailed by as many as 21 points during a sloppy first half in which they were held to 38 points and committed 12 turnovers which led to 15 Cleveland points. The Celtics also struggled from the beyond the arc, going 3-for-15 from 3-point range before halftime.

Jayson Tatum scored 24 of his 29 points and Jaylen Brown scored 21 of his 28 points in the second half and Boston cleaned things up by not committing a turnover the rest of the game.

But a Garland layup and then a dunk by Isaac Okoro and a subsequent free throw after he drew a foul on Tatum kickstarted a 10-2 surge that put Cleveland ahead 110-98 with 1:29 left.

Boston scored five consecutive points on Marcus Smart’s three free throws and a Brown layup. Robert Williams III forced a five-second violation and tapped in a missed shot by Brown to cut the deficit to 110-105 with 54.7 left.

Cleveland made 7-of-8 free throws in the final minute, however, to seal the outcome. The Celtics went 20-for-29 from the free-throw line overall while the Cavaliers shot 27-for-33.

Nance Jr. finished with 18 points and 10 rebounds for the Cavaliers while Okoro totaled 15 points and Cedi Osman added 10.

Smart finished with 19 points while Williams III totaled 13 points and 14 rebounds. Williams III landed awkwardly on his right leg on a fast-break layup attempt after being fouled by Larry Nance Jr. with 11:29 left in the fourth quarter and exited the game briefly before returning.

Boston’s Kemba Walker rested on the second night of back-to-back games. Tristan Thompson and Romeo Langford were out again due to the NBA’s health and safety protocols.