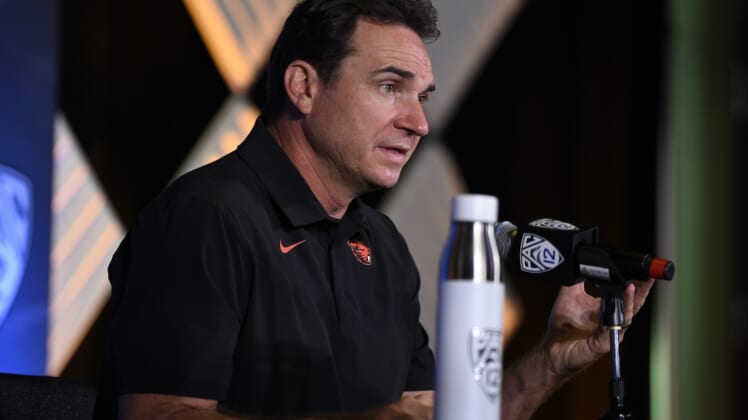 Nolan, making his second consecutive start after beginning the season as a backup, completed 14 of 19 for 175 yards and threw scoring passes to Tyjon Lindsey and Teagan Quitoriano as the Beavers (2-1) built a 28-0 halftime lead.

B.J. Baylor had the first of his two touchdowns and Deshaun Fenwick added another rushing score as Oregon State reached the end zone on each of its first four possessions and scored 14 points in each of the first three quarters.

The FCS Vandals (1-2) finished with just 192 total yards and allowed 438. They turned the ball over on downs four times, punted three times and threw two interceptions.

Nolan completed the first possession of the third quarter with a 30-yard touchdown pass to Champ Flemings for a 35-0 lead.

Baylor’s 2-yard touchdown run pushed the lead to 42-0 with 5:39 left in the third quarter.

Idaho drove to the Oregon State 31-yard line on the game’s first possession, but turned the ball over on downs.

The Beavers took advantage by driving to an 18-yard touchdown pass from Nolan to Lindsey.

After a Vandals’ punt, Baylor ran 4 yards for a touchdown that gave Oregon State a 14-0 lead at the end of the first quarter.

Idaho turned the ball over on downs again when it threw an incomplete pass on fourth-and-20 at the Beavers 42. Oregon State then drove to Fenwick’s 9-yard touchdown run and a 21-0 lead.

The Vandals made it three turnovers on downs in four possessions when they threw another incomplete pass on fourth-and-13 at the Beavers 33. Oregon State made it four touchdowns in as many possessions when Nolan threw a 2-yard touchdown pass to Quitoriano to complete the first-half scoring.