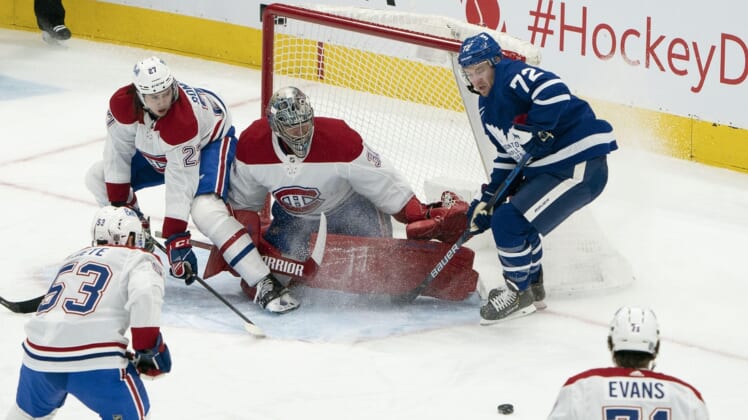 Brendan Gallagher scored late in the third period to snap a tie as the visiting Montreal Canadiens came back to defeat the Toronto Maple Leafs 2-1 Saturday night.

Gallagher knocked down a shot from defenseman Jeff Petry before shooting home his sixth goal of the season at 16:53 of the third.

Mitchell Marner scored for the Maple Leafs who had their winning streak stopped at four games.

Carey Price made 21 saves in the Montreal goal while Frederik Andersen stopped 23 shots for Toronto.

Marner scored his seventh goal of the season — and the first of his career against Montreal in 17 games — at 3:36 of the first period.

A backhand pass from Auston Matthews from the side of the net found Marner uncovered in the low slot. Matthews has registered at least one point in 12 straight games. Zach Hyman also earned an assist.

Matthews missed the net when Marner set him up on a two-on-one break at 14:10 of the first period and William Nylander hit the post for Toronto at 18:10.

Toronto had a 9-6 advantage in shots on goal in the first period.

Toronto continued to control the game in the second period. Montreal did not have its first shot on goal in the period until Toffoli tested Andersen at 6:53.

The Canadiens had only sporadic chances during the second before they applied some pressure late in the period.

The Maple Leafs had a 16-13 edge in shots on goal after the second period.

The Canadiens applied some pressure at the start of the third period and Toffoli scored his 10th of the season at 6:11 on a 14-foot wrist shot after a pass from Phillip Danault. Gallagher made the first pass to earn an assist.

Tomas Tatar was a healthy scratch for Montreal.