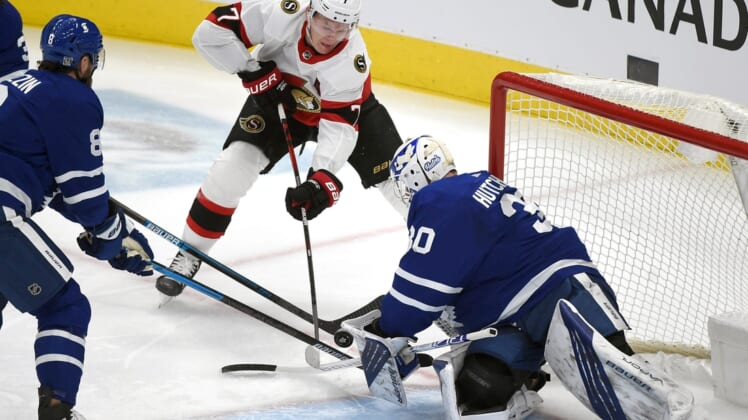 William Nylander had a goal and an assist, Alexander Kerfoot had two assists and Ilya Mikheyev and John Tavares added goals for Toronto in the rubber match of a three-game series. Morgan Rielly contributed two assists.

Tim Stutzle had a goal and assist for Ottawa while Connor Brown and Drake Batherson each added a goal.

Michael Hutchinson made 34 saves in his first start of the season in the Toronto goal.

The Maple Leafs led 3-1 after the first period.

Matthews, who matched his career-best with the four-point game, opened the scoring with a power-play goal at 10:29 on a shot from the right circle. Christian Wolanin was off for tripping.

Ottawa goaltender Marcus Hogberg, who allowed one goal on five shots, left with an apparent right-leg injury 12 minutes into the game. Matt Murray took over and made 20 saves.

Thornton scored his third goal of the season, deflecting Jake Muzzin’s shot at 16:43.

Stutzle replied for Ottawa with his fifth goal, finishing a rush along the left wing with a shot from a sharp angle.

Matthews scored his 16th goal of the season at 19:37 on a spin-around from behind the net.

Toronto scored twice early in the second period to take a 5-1 lead. Mikheyev notched his second this season on a 44-foot wrist shot at 1:39. Marner scored his eighth from close range at 3:45.

Brown got his fourth goal this season from the right circle at 7:39 of the second after working a give-and-go with Matthew Peca.

Nylander restored the four-goal margin at 11:00 of the second on a power play with his fifth of the season on the rebound of Jason Spezza’s shot. Erik Brannstrom was off for hooking.

Batherson scored his third goal at 11:11 of the third period. Tavares scored his sixth at 16:53.