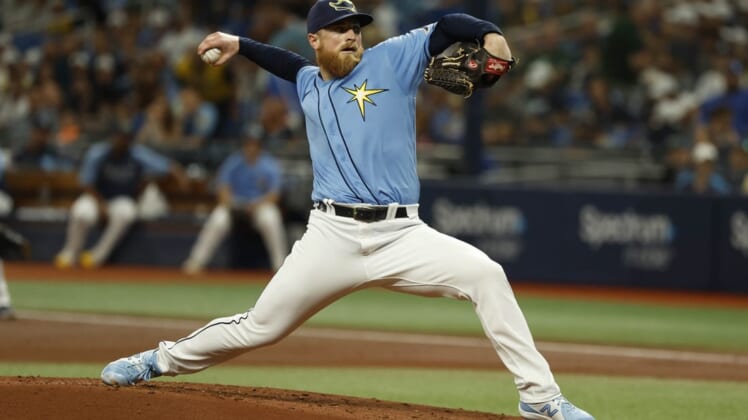 When the Tampa Bay Rays host the Kansas City Royals on Saturday in the third matchup of their four-game series, Drew Rasmussen will return to the same mound where he nearly made history last weekend.

In a 4-1 win over the Baltimore Orioles on Sunday, the Rays’ right-hander came within three outs of the 24th perfect game in major league history. He lost it when Jorge Mateo ripped the first pitch of the ninth inning over the third-base bag for a double.

The Rays have been part of three perfect games, but only on the losing side, a low mark they share with the Los Angeles Dodgers.

The Chicago White Sox’s Mark Buehrle (2009), the Oakland Athletics’ Dallas Braden (2010) and the Seattle Mariners’ Felix Hernandez (2012) retired all 27 Rays they faced in those perfect starts.

A converted reliever, the 27-year-old’s previous longest outing was the seven scoreless innings he threw on June 4 against the Chicago White Sox in a no-decision.

In three career appearances (one start) against the Royals, Rasmussen is 2-0 with a 1.29 ERA across seven innings. He beat them on July 22 in Kansas City when he tossed five innings of one-run ball in a 7-3 victory.

Rasmussen’s mound opponent on Saturday will be left-hander Kris Bubic (2-7, 5.11).

Bubic, who turned 25 on Friday, limited Tampa Bay to two runs in seven innings during a 4-2 victory on July 24. However, that was his latest win.

He will look to rebound from a poor start Monday in Minneapolis, where the Minnesota Twins got to him for four runs on 10 hits in 5 2/3 innings, handing Bubic a 4-2 loss.

The Royals and Rays have split the first two games of the series, with Tampa Bay taking the opener 7-1 on Thursday before Kansas City earned a 3-2, 10-inning victory Friday.

Tampa Bay lost in extra innings for the second time in three days.

With the Rays leading 7-4 through 9 1/2 innings on Wednesday in New York, Jalen Beeks surrendered a walk-off grand slam to the Yankees’ Josh Donaldson. Beeks also took the loss Friday when Michael Massey drove in the deciding run with a sacrifice fly.

“His 50-50 ball-strike (numbers) shows how good his stuff is,” Cash said. “Even when he fell behind, he could get back in the count or get some outs. Certainly a talented pitcher.”

Kansas City’s MJ Melendez, primarily a catcher, played a major role with a pair of standout defensive plays in the outfield.

In just his sixth start in left field, Melendez threw out Taylor Walls in the ninth inning as the Rays’ shortstop tried to stretch a single into a double. An inning later, Melendez ended the game with a diving snare of a shallow fly ball.

“It’s a little bit different,” Melendez said of his first outfield assist. “(There) are a little bit less opportunities in the outfield sometimes; at least it feels like for me so far.”