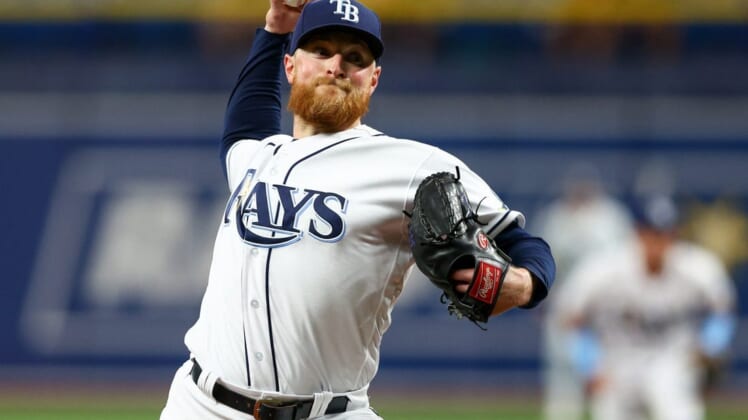 Despite being hit by a multitude of injuries in the season’s first half, the Tampa Bay Rays likely wanted to keep playing this week rather than halt play because of the All-Star break.

Currently holding the American League’s No. 1 wild-card spot, the Rays will open play against the Kansas City Royals for the first time this season when they start a three-game series Friday night in Missouri.

So far this week, ace Shane McClanahan has been the only Ray making news. In the middle of a spectacular sophomore season, the left-hander became the first Rays pitcher since David Price (2010) to start an All-Star Game.

“Absolutely honored, humbled and beyond thankful,” McClanahan posted on Instagram after allowing two runs on four hits in a rough first inning. “I can’t thank my teammates enough for everything we’ve accomplished through the first half. While tonight wasn’t my best, I’m so thankful to have been (a part) of it and even more honored to be the AL starter.”

While McClanahan likely returns to the rotation this weekend, Drew Rasmussen (5-3, 3.22 ERA) will be on the mound Friday.

Though he was strong over his first nine starts, the right-hander is 0-2 with a 4.03 ERA across his past six starts. In 29 innings, he has surrendered 30 hits and five home runs.

In two brief relief appearances (two innings) against the Royals, Rasmussen has one win and hasn’t yielded a run, with Kansas City hitters going 1-for-7 with a walk.

Tampa Bay finished up the first half of the season by winning six of its last seven games before the break to start July with an 11-6 record.

Mired in last place in the AL Central and 20 games below .500, the Royals will be seeking to reverse their fortunes against the two-time defending AL East winners.

The Royals concluded the first half by losing four of six games, including three of four in Toronto.

As the 2022 campaign opened, most felt the club’s success would hinge on the development of its young pitching. So far, Kansas City’s staff has greatly underachieved.

The club did not announce a starter for its series opener against the Rays.

In its sole victory against the Blue Jays with 10 players staying in the U.S. due to their vaccination status, Kansas City received a strong outing from Angel Zerpa (2-0, 1.29). The Venezuelan lefty moved up from Double-A Northwest Arkansas and allowed one run over five innings in the 3-1 win.

“It felt like playoffs,” Matheny said. “You can just see the true care and concern they have, the excitement they have, for the young players that have stepped in here and helped us win a major league game.”

Added second baseman Nicky Lopez, who went 2-for-4 with a double in that win: “It was an unselfish win. It was everyone pulling for each other.”