Rapids shoot for second straight win in visit to Earthquakes 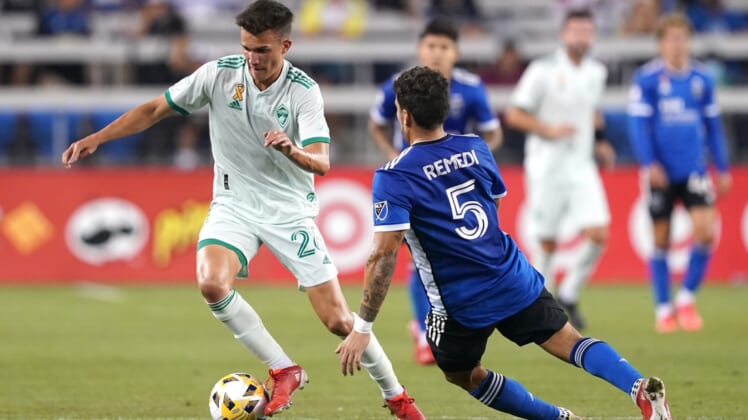 The Colorado Rapids will look to build on their first win in a month when they travel to play the hapless San Jose Earthquakes on Saturday in a Western Conference match.

Colorado (3-3-3, 12 points) heads to Northern California after a 2-0 win at home over Portland on April 30 that snapped a five-match winless run (two losses, three draws). It was the Rapids’ second straight shutout and was accomplished despite playing the final 27 minutes and stoppage time with just 10 men.

Diego Rubio and Mark-Anthony Kaye were the goal-scorers in the victory. The duo has combined for seven of the Rapids’ last eight MLS goals.

Rubio will miss Saturday’s game, however, after accumulating two yellow cards in the win against Portland.

“San Jose has got good players who can hurt you,” Rapids coach Robin Fraser said. “The key for us is to be defensively solid and limit their chances. Offensively, we have to be good with the ball. We’ve seen that we tend to have more control in games and create more chances.”

Saturday’s match is the first of four over a 16-day stretch for Colorado.

The Earthquakes (1-5-3, 6 points) return home after a 3-0 loss at New York City FC on Sunday. San Jose had beaten Seattle 4-3 at home on April 23 in the first game after the firing of manager Matias Almeyda but reverted to its previous form in the loss in the Big Apple.

San Jose has allowed 23 goals this season, most in MLS, and has conceded at least three goals in five of their nine games.

“With Alex (Covelo)’s system, we emphasize a lot about spaces and being not so man-oriented as we have been in the past few years,” Yueill said. “That allows for you to get in front of your mark and be more connected to your teammates than it is to worry about the other players.”

Colorado won in San Jose last September to snap a 10-match winless run on the road against the Earthquakes. The Rapids have not captured consecutive matches in San Jose since July-Aug. 2003.