After weeks of being the hottest name on the MLB trade market, Giancarlo Stanton finally has a new home with the New York Yankees. Quite frankly, the idea of Stanton and Aaron Judge teaming up is terrifying not just for opposing baseballs, but also for fans of rival teams.

With that said, this is not the first time we’ve been down this road. Superstar teaming up is hardly a new phenomenon in Major League Baseball. So, who are the best, and where do Stanton and Judge rank among them?

This is not the first, or even second time that we’ve been down this road with the Yankees. Other teams, like the San Francisco Giants and Cincinnati Reds, have also had multiple sets of star teammates.

These groupings of two, three, or even four superstars are all iconic. But these are the top 16 teammate tandems in MLB history, and where Stanton and Judge rank among them.

The trio was split up when Griffey went to the Cincinnati Reds following the 1999 season. A year later, A-Rod went to the Texas Rangers. That ended a remarkable run from these three star teammates.

Longevity was not the friend of the Nasty Boys. Dominance, however, was. In the 1990 NLCS against the Pittsburgh Pirates, the trio combined for a 0.57 ERA, 0.83 WHIP.

Even with them, the Reds were longshots against the Oakland Athletics (more on them later) in the World Series. The A’s had won 103 games in 1990 and were coming into the series having won eight straight playoff games. Charlton, Myers, and Dibble didn’t allow a single run against them, though, as Cincinnati swept Oakland in four straight. The run wasn’t long. But it was brilliant. 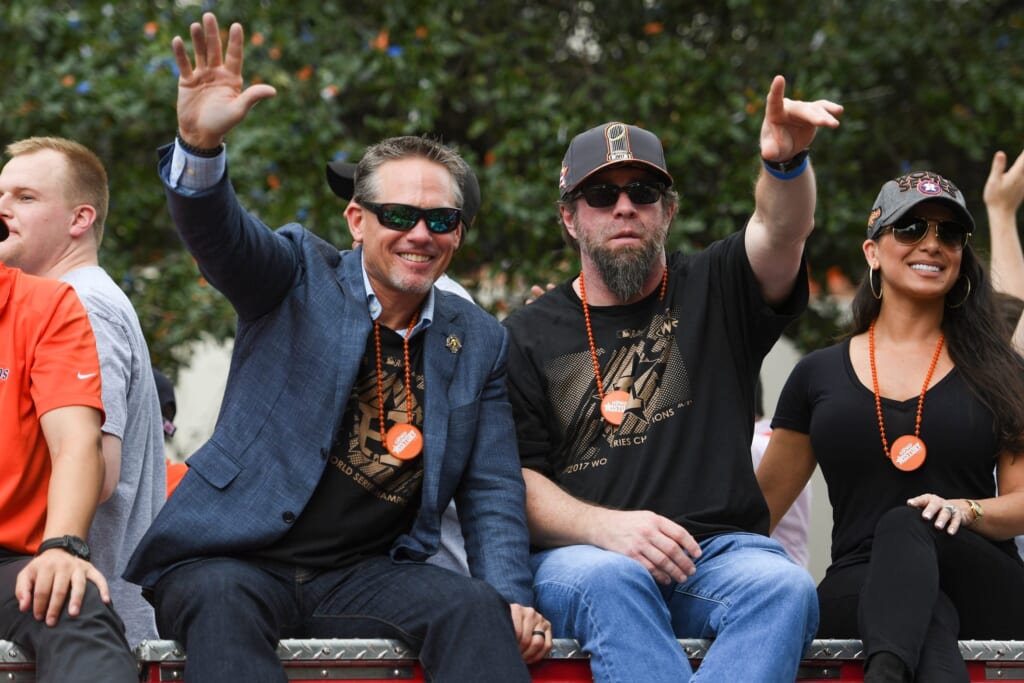 Unfortunately, Bagwell and Biggio couldn’t win a championship. But for more than a decade, the Houston lineup featured two Hall of Famers in their primes.

This duo (along with Gary Sanchez and, for that matter, the rest of the Yankees team) is loaded with potential. These New York sluggers rank relatively low for two reasons.

One, we haven’t seen what they can do together yet.

Two, as good as they all are, these are similar players. Stanton, Judge and Sanchez are all power-first guys. They swing for the fences and aren’t afraid to strike out. In the postseason, the best pitchers can use that against them. We need to see how they adjust. The potential is out of this world. So, if they adjust well, this group will be much higher on this in one year’s time.

“Bryzzo” is similar to the new Yankee teammates in that there’s a lot left to be proven. But unlike Stanton and Judge, we’ve seen what this pair can do. Since Bryant’s 2015 debut, the pair has hit .284/.388/.524 and combined for an average of 202 runs, 198 RBI, and 63 home runs per year. And while those numbers aren’t as gaudy as some of our aforementioned offensive teammates, Bryant and Rizzo have led the once hapless Cubs to three straight NLCS appearances and a World Series win in 2016. That definitely gives them a rightful place among the greatest teammates of all-time.

In a number of years, we may be looking at Bryant and Rizzo ahead of Ortiz and Ramirez. But for now, the Red Sox pair gets a slight nod.

Here we have our top teammates that never won a championship together. But it’s hard to rank the combo of arguably the greatest overall player of all time and probably the most feared hitter of the 1960s any lower.

From McCovey’s first full season with the Giants (1960) through Mays’ last with the team (1971), these two averaged a .289/.383/.549 line and combined for 175 runs, 180 RBI, and 63 home runs per season. Granted, those averages are good, but not as overpowering as some other teammates. But that kind of production for 12 years is simply overwhelming.

One of only two quartets on the list, Palmer, Cuellar, McNally, and Dobson anchored the pitching rotation that was the backbone of the American League’s most dominant team from the mid-1960s into the early-1970s. In 1971, each of these four pitchers won 20 or more games for the American League champs.

That had only happened once before (the 1920 Chicago White Sox). Barring a tremendous change in how pitchers are used, will never happen — or even be seriously approached — again.

The Bash Brothers were only together for five full seasons. But while things did fizzle out rather quickly, these two were a lethal force in the middle of the Oakland lineup for a half decade. From 1987-1991, McGwire hit 175 home runs. That included 49 in 1987, a rookie record that stood for 30 years. Canseco, meanwhile, hit 171 bombs in that same stretch. He also became baseball’s first 40-40 man in 1988.

The A’s won 306 games from 1988-1990, winning the American League Pennant each year and the 1989 World Series. Oakland was far from a one-trick pony, but the Bash Brothers were a driving force.

Similar to the Bash Brothers, Johnson and Schilling weren’t together for a long time. But when these two were clicking, Arizona had an unhittable 1-2 punch. From 2001-2003, Johnson and Schilling combined for a 104-41 record, posted a 2.91 ERA, 1.05 WHIP, and averaged 11.2 strikeouts per nine innings. Mind you, they did this while not only pitching in a very hitter friendly ballpark, but also right in he middle of the Steroid Era.

In 2001, it all came together. Johnson and Schilling led the Diamondbacks to the World Series title, ending the three-peat of the Yankees. Together, they earned all four of Arizona’s wins in the series.

Koufax and Drysdale were essentially what Johnson and Schilling would have been if they became teammates earlier in their careers and remained together for a long time. The duo were teammates during the franchise’s final two years as the Brooklyn Dodgers, but both men hit their strides when the team moved west. From 1958-1966, Koufax and Drysdale went 207-96, posting a 2.86 ERA and 1.11 WHIP.

Also, in an era where hitters were genuinely concerned with striking out, they averaged eight strikeouts per nine innings. It’s not hard to see why Los Angeles won four pennants and three championships in that stretch.

We could try to find teammates that had a better three-year stretch than what the M&M Boys did from 1960-1962. But only one duo really (who we’ll get to soon enough) comes to mind. The .284 average and .402 OBP are good, but it’s the power numbers that are really eye-popping. The M&M Boys slugged at .587, averaged a combined 86 home runs and 221 RBI per year.

In the same stretch, one of the two won the American League’s MVP in each season and the Yankees won three AL Pennants and two championships. The peak years of the M&M Boys was not a long stretch. But it was a dominant run.

We know that Rose isn’t in the Hall of Fame. But in this time period, the Cincinnati lineup had three Hall of Famers and another with clear Hall of Fame talent. Opposing pitchers did not look forward to drawing Cincinnati as one of their starts.

Everything that was magic about Johnson and Schilling applies here, only these three were great teammates for even longer. In 1993, Maddux joined Glavine and Smoltz in Atlanta. From 1993-2002, they posted a collective 2.97 ERA and 1.16 WHIP in the midst of the steroid era.

Only unlike Johnson and Schilling, these guys weren’t missing bats at a prolific rate. The hitters made contact, just very quiet contact. One of these three won the Cy Young on five different occasions in that stretch, adding to the ones that Glavine and Maddux had already won.

Only a pair of legendary teammates tops this trio.

In truth, if we revisited this in 100 years, these two would probably still top the list without much debate. The two were teammates from the time Gehrig joined the Yankees (1923) until Ruth’s last year with the team (1934).

The six-season stretch from 1927-1932, however, was the duo’s peak. In that time, the pair of Ruth and Gehrig averaged a .351/.466/.689 slash line, 287 runs scored, 312 RBI, and 88 home runs per season. The Murderer’s row lineup featured two other Hall of Famers (Earle Combs and Tony Lazzeri). But Ruth and Gehrig made a great lineup the most feared in MLB history.