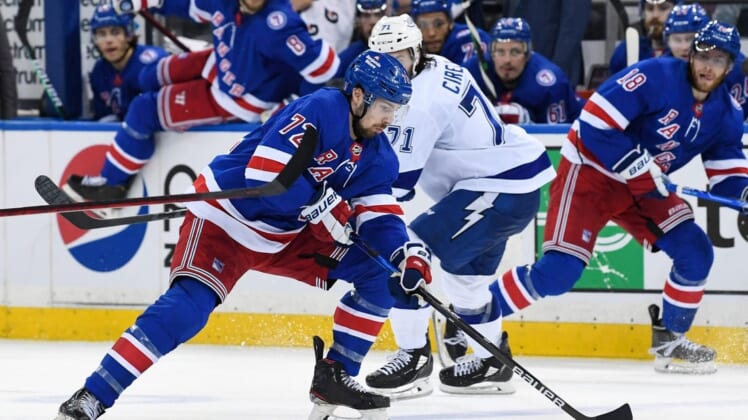 NEW YORK — Mika Zibanejad scored 81 seconds into the third period, and the New York Rangers rallied from an early deficit for a 3-2 victory over the Tampa Bay Lightning on Friday night to take a two-games-to-none lead in the Eastern Conference finals.

Two seconds after a turnover by Tampa Bay star Nikita Kucherov to Chris Kreider near the neutral zone, Zibanejad scored his ninth of the postseason and his sixth in the last seven games.

Following Kucherov’s giveaway, defenseman Adam Fox spotted Zibanejad streaking down the left side and quickly moved the puck. After getting the pass, Zibanejad ripped a shot from above the left faceoff circle that sailed over goalie Andrei Vasilevskiy’s stick.

The best-of-seven series shifts to Tampa for Game 3 Sunday afternoon, and the Lightning are 4-1 at home in the postseason.

Youngsters K’Andre Miller and Kappo Kakko scored for the youthful Rangers, who extended their team record with their eighth straight postseason home win.

Kucherov scored an early power-play goal to give the Lightning a 1-0 lead, and Nick Paul scored when the Lightning had the extra attacker with 2:02 remaining and were down 3-1.

Goalie Igor Shesterkin made 29 saves to improve to 9-3 in his past 12 games since getting pulled in Game 4 of the first round in Pittsburgh. He capped his latest win by making glove saves on Kucherov and Steven Stamkos in the final minute.

Tampa Bay went ahead 2:41 into the game, shortly after Patrick Maroon drew a slashing penalty on Ryan Reaves. Kucherov flew down the left side and flicked a wrist shot from the left circle that went over Shesterkin’s glove as the goalie was screened by Corey Perry.

It took the Rangers less than 3 1/2 minutes to even the game when Miller scored his second of the postseason. His initial attempt was blocked by Brandon Hagel, but he quickly regained possession and put a wrist shot past Vasilevskiy’s glove.

New York took a 2-1 lead late in the first when Kakko slipped past Stamkos and Victor Hedman to the right side of the crease, waited for a pass from Fox, and flipped the puck into the net for his second of the postseason.

After Zibanejad scored, Paul made it a one-goal game by slipping the puck over Shesterkin’s stick into the right side of the net after getting a pass from Perry.