Rams ready to welcome back running back Cam Akers 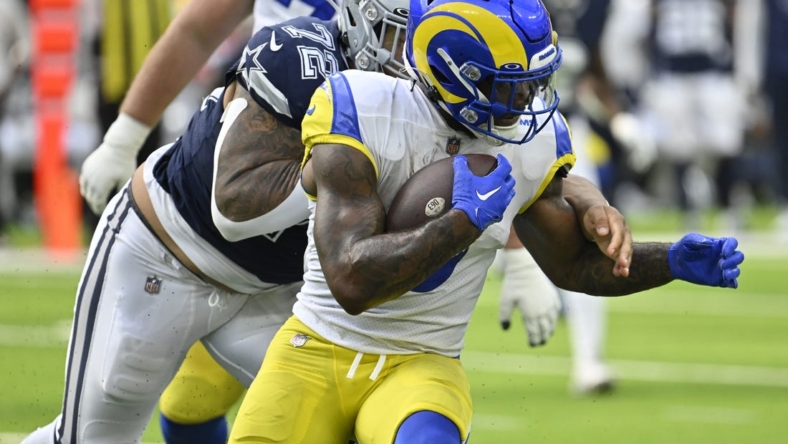 Rams head coach Sean McVay is ready to welcome back Cam Akers, if the running back would like to return.

The Rams turned down trade offers for Akers, McVay said, and are in talks with his agent to get him back in the fold.

McVay said Oct. 17 it was time for Akers to find a “fresh start with another team,” and detailed the Rams’ plan to help him find one. When no trade partners offered the bounty the Rams were hoping for before Tuesday’s trade deadline, McVay decided it was time to pull a U-turn.

Akers played in the first five games of the 2022 season and started two. But then he missed multiple days of practice, citing “personal” reasons, and did not suit up for the Rams’ 24-10 win over the Carolina Panthers. He hasn’t been with the team since.

The next day, McVay said, “I think the best option for all parties I think would be to explore if there’s a good situation for him with another team. If that doesn’t come to fruition, I would never say that him coming back and figuring out the best way to be able utilize him and him being the best player he’s capable of is off the table. I would never speak in absolutes like that.”

Akers was the Rams’ second-round pick in the 2020 NFL Draft. He has played only 19 games (seven starts) for the team in two-plus years after missing most of the 2021 regular season with a torn Achilles.

When he was on the field this season, Akers gained 151 yards on 51 carries and scored one touchdown. For his career, he’s recorded 779 yards, three rushing touchdowns and a receiving score. He added two rushing touchdowns in the 2020 playoffs.

The Rams still have Darrell Henderson as their starting running back with Malcolm Brown also on the depth chart.