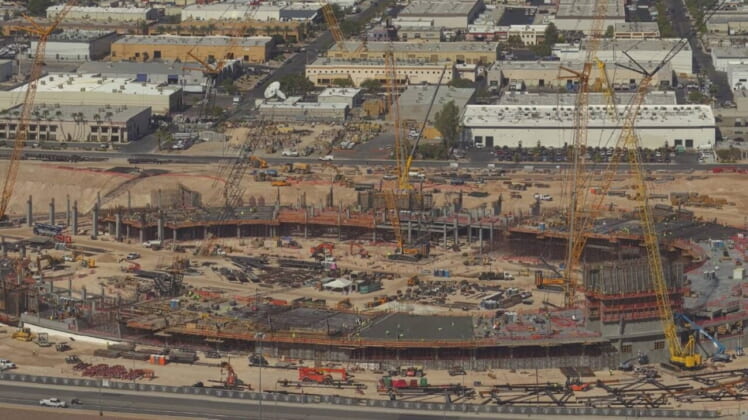 The Clark County Zoning Commission will hear from the Raiders for the first time on their plans to provide the requisite number of parking spaces needed for the new $1.8 billion stadium located just west of the Las Vegas Strip.

The parking plan is in, and, to no one’s surprise, the Raiders will use existing sites and a shuttle service to ferry fans to games when the team opens its state-of-the-art stadium in August 2020.

The Clark County Zoning Commission will review the plan during its Wednesday meeting next week, as documents outlining the parking situation were made available in advance. The plan consists of utilizing 14,650 parking spaces, which include 2,375 on the stadium site. The other 12,275 will be located offsite near the area.

The offsite parking locations include 4,625 spots at the Orleans Hotel & Casino, 1,175 at the Southwest Gas facility on Arville Street and Tropicana Avenue, 3,625 at a lot located near the corner of Blue Diamond Road and Las Vegas Boulevard, and 2,500 at Las Vegas Boulevard and Arby Avenue.

The plan is clear in noting existing parking structures across I-15 from the stadium (Mandalay Bay, Luxor, Excalibur) allow access to another 25,000 spaces. There are well over 60,000 parking spaces within three miles of the stadium site as well.

“The plan will undoubtedly change as consumer habits, transportation options and Stadium operations change,” said Don Webb, CEO of the stadium development company. “The manner in which the plan has been conceived reflects this dynamic and facilitates our ability to adapt.”

One of the locations noted in the Raiders parking plan includes the corner of Blue Diamond Rd. and Las Vegas Blvd.

While the plan is still evolving, it probably won’t please those who would prefer parking on site for tailgating, access and other activities. The reach and ability to have the number of spaces required within a five-minute ride certainly fits the bill. With most urban football stadiums, parking is a different affair than many West Coast fans are accustomed to. The Raiders’ plan for parking near the site and utilizing buses and shuttles to get fans to the stadium will minimize traffic and other concerns on game day.

As stated several months ago, concern over parking was overblown, primarily by stadium detractors and legacy fans worried about the tailgating experience. While tailgating wasn’t addressed formally in the plan, team officials have said details are coming and fans will be able to enjoy that experience as well.

When you include the ability for fans to walk to the game (a pedestrian walkway from Mandalay Bay over I-15 is in the construction plans), the availability of ride-share services such as Uber and Lyft, and a large number of visitors expected to attend games, the plan certainly checks all the right boxes.

As Mick Akers noted in the Las Vegas Sun report, the Raiders will have control over more parking spaces than any other urban stadium in the NFL.

Las Vegas is a unique market and it’s no different when it comes to hosting its future team’s games. The worry and fretting over parking has always been misplaced and the plan shows it. Fans in other NFL markets often park offsite and ride buses and other mass transit to games over longer distances – up to 30 miles or more. The fact the team was able to secure the number of spaces it did, all within between 5-10 minutes of the site, is an accomplishment in itself.

For those used to driving up to a stadium and parking right next to it, this might be a change. But in the era of sustainability, with more and more fans finding alternate ways to the game, the plan seems to fit the bill.

Of note: the Raiders have continually said the plan will change and new elements (tailgating) will be added as construction progresses. Although parking isn’t the issue some make it, don’t expect this to be the last time we hear of additional locations and options for fans on game day.