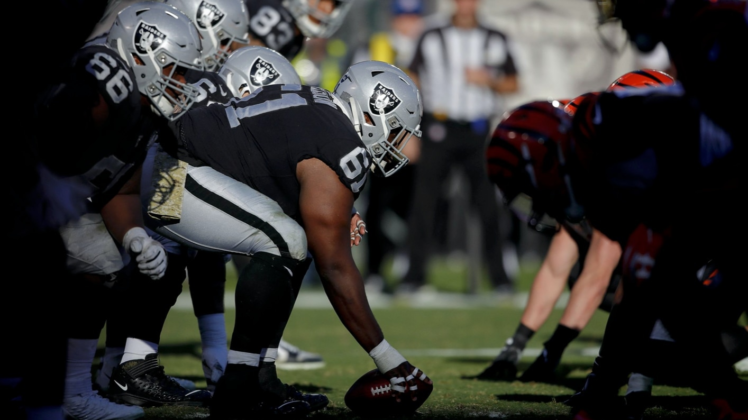 The Raiders offensive line missed a week of practice they needed to face this ferocious Tampa Bay Buccaneers pass rush. Can they survive on Sunday?

After a huge victory against the Kansas City Chiefs in Week 5, the Las Vegas Raiders had a bye week as they prepare to host Tom Brady and the Tampa Bay Buccaneers in Las Vegas. Add a positive COVID test for starter Trent Brown, and the subsequent mess that ensued, and the Raiders might have lost the momentum before they even hit the field.

The Raiders won’t be alone in trying to build some momentum after a big win as the Buccaneers dominated the previously undefeated Green Bay Packers 38-10 on Sunday.

As with any football game, this one will be a battle in the trenches. The Raiders offensive line will have their hands full as they attempt to stymie one of the most effective pass-rushing teams in the league while doing so short-handed yet gain.

Packer’s quarterback Aaron Rodgers – who was having an MVP caliber start to the season – was pressured all day long by the Buccaneers intimidating defensive front and could never establish a rhythm. Tampa Bay had five sacks and kept Rodgers guessing the entire game.

According to ESPN, through six weeks of NFL action, the Buccaneers as a team are first in the NFL in pass rush win percentage. Ndamukong Suh and Jason Pierre-Paul, two veterans, have each enjoyed great starts to the season with 3.0 and 5.5 sacks each.

Add on Shaquil Barrett, whose 19.5 sacks lead the NFL last season, and it’s clear that this is a very talented and dangerous group. The Raiders offensive line will have their hands full.

The Raiders offensive line has been one of the team’s strengths for a couple of years now. The big maulers upfront open holes for Josh Jacobs in the run game and make sure quarterback Derek Carr’s jersey stays clean in the passing game.

The unit has had to deal with injuries to start this season but made strong progress last week when tackle Trent Brown returned to the lineup. Brown blew up the week not because he tested positive for COVID-19, but because he allegedly took off his tracking device meaning the entire starting offensive line had to miss practice and be quarantined the entire week.

Brown will be out of the lineup once again this week though it is not related to his previous injuries. The offensive lineman had a COVID-19 test come back positive which resulted in him and the entire starting group being sent to the reserve/COVID-19 list.

At this point it looks like the game will continue on Sunday despite the fact that the Raiders will not have a starting offensive lineman practice with the team this week. Kolton Miller, Denzelle Good, Rodney Hudson, and Gabe Jackson could all return for the big game as long as they continue to test negative throughout the week.

While hopefully these four are able to play, the loss of practice time will make trying to slow down the Buccaneer front only more challenging. If the group sees another positive test, that could mean that the team would have to rely on one or more of Sam Young, Brandon Parker, Andre James or John Simpson.

The Raiders were extremely successful in stretching the Chiefs defense vertically and as the season continues they hope to continue to exploit defenses in this manner. For this to happen, Carr needs time in the pocket to let these routes develop downfield.

Trent Brown’s positive COVID-19 test has thrown a wrench in the team’s gameplan and they will have to face the consequences of their carelessness. If the team has to start a mishmash of starters and backups the results could get ugly quick.

The Raiders have not played a team ranked in the top ten for sacks, much less the top three, and this game will be a big test for the offence. While it will be a challenge, this game also represents an opportunity for the Raiders offence to show that they can produce against anyone and prove that they belong in the discussion of the elite NFL offences.