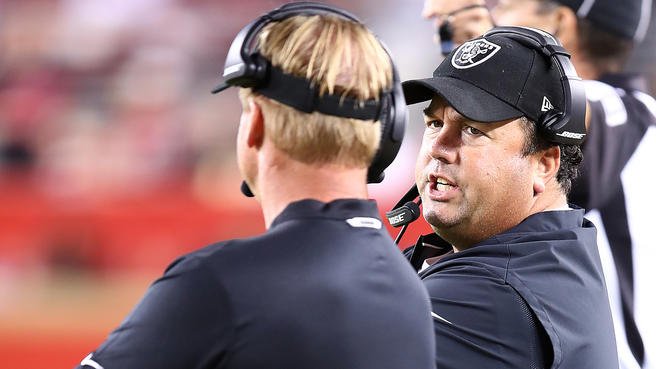 It appears both coach Jon Gruden and general manager Mike Mayock had seen enough after the Las Vegas Raiders were throttled by the Indianapolis Colts 44-27 on Sunday and have parted ways with Paul Guenther.

LAS VEGAS – In a move that isn’t surprising considering recent results, the Las Vegas Raiders tonight have relieved defensive coordinator Paul Guenther of his duties. The team issued a statement this evening after the team’s 44-27 loss to the Colts. The statement also says defensive line coach Rod Marinelli will be elevated to DC for the remainder of the season.

Guenther’s defense has been struggling all season and ranked near the bottom of every category in the league. Against the Colts, Las Vegas’ defense yielded 456 total yards – including 212 rushing. The Raiders defense allowed Indianapolis to convert on 73% of it’s third downs on the day and the Colts punted just once the entire game.

The Raiders (7-6) were 6-4 after a close loss to the Kansas City Chiefs at home last month and have given up an average of 37.5 points per game since. Las Vegas’ playoff hopes dimmed after the loss today but are not completed vanquished.

Apparently, old friend Gruden and Mayock did not think it was a good idea to wait until the end of the season to jettison Guenther.

Although Marinelli will take over for the remainder of the season, the Raiders defensive line has been underachieving as well.