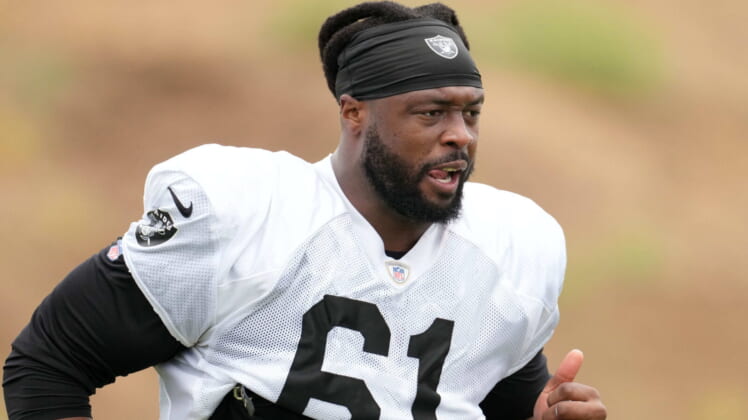 Las Vegas Raiders final roster cuts are coming but not before the team takes on the San Francisco 49ers in their third and final preseason game Sunday in Santa Clara at 1:00 p.m. at Levi’s Stadium.

The Raiders, meeting their former long-time cross-bay rivals for the first time since 2011, and will be the Raiders first trip to the Bay Area since being relocated from Oakland to Las Vegas.

Head coach Jon Gruden told the media Friday that he is ultimately focused on finishing the preseason with as many of his young players seeing significant time before the Raiders final roster cuts next week. Very few – if any – of the Raiders starters will see playing time.

“I don’t think there’s going to be any parade or anything like that, but we all have great memories there, no doubt,” Gruden said about the team’s first return trip to the Bay Area since relocation. “Just looking forward honestly to seeing these young guys compete. We’re going to play a lot of our young players and finish this evaluation process and hopefully come out healthy and try to find a way to win the game in the process.”

On Tuesday, the Raiders cut down its roster by five spots. By next Tuesday, the team will have to decrease their roster from 80 to 53 ahead of the team’s first regular-season game. For Gruden and GM Mike Mayock, the Raiders final roster cuts will, once again, prove to be a tough exercise.

While one preseason performance doesn’t mean a player will survive the Raiders final roster cuts, it could help or, at the very least, make them more attractive to other teams.

Still trying to be one of the chosen players who doesn’t face the Raiders final roster cut next week is center Jimmy Morrissey.

Standing at 6-foot-4 and 305 pounds, the rookie center from the University of Pittsburgh started all 47 games in his four seasons as a Panther.

Gruden said Morrissey’s journey while playing for the Panthers has helped him mature and mentor this preseason, even as a rookie. Whether or not it helps him survive the Raiders final roster cuts is anyone’s guess.

“Jimmy Morrissey is like a coach on the field,” Gruden said. “He’s everything that was advertised at Pitt. He obviously came from nowhere as a walk-on to starting every single game. He’s a gym rat. He loves it. He can make all our calls. He’s got good athleticism. Really pleased with his progress. He’s put himself in contention to make our team.”

Another player contending to make the 53-man roster and survive the Raiders final roster cuts, but has an entirely different backstory, is defensive tackle, Gerald McCoy.

One thing that is similar between Morrissey and McCoy is that they both have the ability to mentor and teach.

McCoy, who is entering his 11th NFL season, was a former third overall pick in 2010 by the Tampa Bay Buccaneers and went to six consecutive Pro Bowls from 2012 to 2017. He was also named a First-Team All-Pro in 2013.

Gruden said he cannot wait to see what McCoy can do this season as he watched his career transpire, especially taking over a position that was previously held by Pro Football Hall of Famer Warren Sapp.

“I’m most excited to see him more than anybody right now,” Gruden said. “I coached in Tampa, lived in Tampa, follow Tampa for a long time and this guy took over the torch for Warren Sapp. That’s a hard thing to do. He went down there to Tampa and went to four, five straight Pro Bowls. This is one hell of a player.

“He’s a great guy and he’s been a great teacher, a great presence in our D-Line room, our defensive meeting rooms. (On Thursday), we cut him loose the last two days in pads and he’s starting to resemble McCoy and I told him that if he plays like he practices, he’ll get another number. He won’t have to wear that number 61.”

Blessings in disguise have transpired during the preseason

Despite all of the injuries this squad has faced during training camp and into the preseason, the team has been able to look at players that might not have originally seen.

One example is at quarterback. With Marcus Mariota questionable over the last couple of weeks and Derek Carr already lined up as the starting quarterback, Nate Peterman has received the opportunity to play two full games and is expected to start tomorrow.

Gruden said those openings have benefitted Peterman during this training camp.

“Even Nate Peterman has taken advantage of these chances and gotten better as well,” Gruden said.

Another example is at running back. Despite a foot injury to Jalen Richard, it has opened the opportunity to Trey Ragas and B.J. Emmons.

During the first two preseason games against the Seattle Seahawks and the Los Angeles Rams, Emmons combined to record 17 carries for 79 yards and a touchdown.

In addition, Ragas combined to post 19 carries for 63 yards and two touchdowns during the first two preseason games. On the receiving side, the 24-year-old running back recorded five receptions for 44 yards.

Gruden said being able to watch the two rookie running backs has also been a plus during the preseason.

“The only thing that happened on that front in a positive light is that we’ve got a chance to look at Ragas and Emmons, two guys we didn’t know much about,” Gruden said.

After tomorrow’s game against the 49ers and Tuesday’s roster reduction to 53, the Raiders begin its 2021 season on Monday Night Football against the Baltimore Ravens on Sept. 13 at 5:15 p.m. at Allegiant Stadium.

For the latest news next week on the Raiders final roster cuts, make sure to come back each day for the latest team news from Las Vegas.