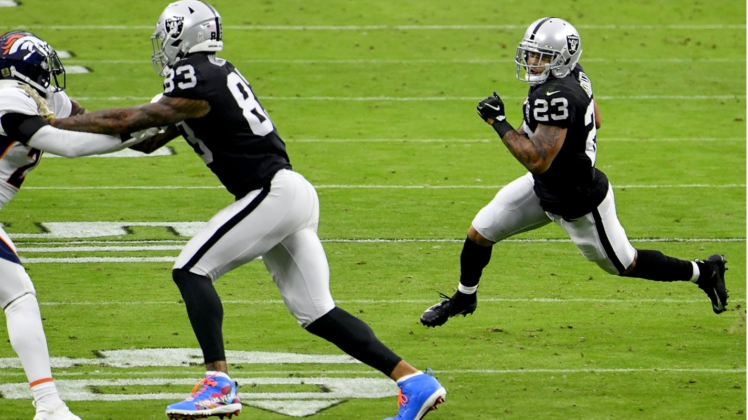 After signing a one-year contract for the veterans minimum, running back Devontae Booker has resurrected his career with the Las Vegas Raiders.

After an excellent rookie season by Josh Jacobs in 2019, the Raiders offseason signing of Devontae Booker to a one-year deal for the veterans minimum went without much fanfare. Booker had played four seasons for the division rival Denver Broncos but had had his role restricted further and further in each one.

By the time that he got to Las Vegas, Devontae Booker had only rushed for nine yards in the previous season and it seemed as if his career was coming to an end. Instead, Booker has taken the most of his opportunity playing in the desert and has established himself as a core part of the team completing the 1-2 punch of the Raiders running back.

He has forced defences to stay on their toes while Jacobs is getting a breather and played a crucial role in helping the Raiders dominate on the ground.

The Raiders are now 6-3, firmly in the playoff hunt as they have made it past the toughest part of their schedule. They have beaten very strong teams such as the Kansas City Chiefs and the New Orleans Saints and while quarterback Derek Carr is enjoying a great season, it’s been the rushing attack that has helped them win games.

It’s no secret that coach Jon Gruden likes to punch teams in the mouth and more times than not this season the Raiders have been successful. The team plays a physical style of football and the running game is what makes it all work.

Jacobs and Booker – along with the beefy offensive line – do a terrific job of controlling the tempo of the game and ensuring that the Raiders can be an effective offense no matter how the passing game is going.

Devontae Booker acts as the thunder to Jacob’s lightning, running straight at defenders instead of twisting around them. The physicality he brings shows late in games when opposing teams are clearly worn down and tired.

The Importance of the Ground Game

Quarterback Derek Carr is enjoying one of the best seasons of his career and he continues to silence his doubters with each performance, yet even with all of Carr’s superb play he is quick to celebrate the two running backs who make his life easier.

“I’m excited about the way that we won the game,” Carr said after Sunday’s home win. “We’re proving that we can win in any type of way.”

The threat of Devontae Booker or Josh Jacobs in the backfield keeps defenses honest and forces them to honor the possibility of a run. In addition, the two backs often wear the defense down on early downs, leaving Carr with simpler third-and-short situations.

As the season goes on Raiders fans would love to see Carr form a better connection with rookie speedster Henry Ruggs III, and while it may seem counterintuitive a strong ground presence will only make it easier. Sucking the defense down towards the line of scrimmage will force cornerbacks to make the fatal mistake of playing up on Ruggs and slow-footed linebackers will be more likely to fall for the play-action.

A Big Victory in a Rivalry Game

Devontae Booker played a key role once again in the Raiders’ big victory over the Broncos 37-12 on Sunday as the passing offense sputtered and it was the play of the running backs that kept the chains moving. While some players would have relished in taking revenge over their former team, Booker continued to preach a team mentality when he said “It was just another game. It was a rivalry game for us. We just had to go lay it out there on the field.” after the game.

Jacobs and Booker had a pair of touchdowns each and it’s clear the two feed off of each other’s energy. Postgame, Jacobs was quick to sign Booker’s praises as he said “…it’s just good to see that we are all basically putting our dominance on the game and to see Book [Devontae Booker] out there balling.”

The two may just hold the keys to the rest of the Raiders season as their ability to wear down defenses, control the clock, and open up the passing game helps elevate the team to the next level. If a deep playoff run is in the cards for the Raiders opposing teams should be ready to see a heavy dose of Devontae Booker and Josh Jacobs.

Despite a slew of injuries and all sorts of adversity, the Raiders continue to grow closer building a chemistry you often see in teams who make good playoff runs. When asked, Devontae Booker said the challenges faced by the 2020 squad have brought them closer together.

“I think we’re getting real close. Every guy has that next-man-up mentality,” Booker said after his performance on Sunday. “We prepare each week, no matter if we are the starter, backup, whatever. We are all preparing as if we are the starter, every day in practice. You know, we can see it. We can see everything starting to gel together, and we just have to keep taking it one game at a time.”

Devontae Booker isn’t just making the most of his opportunity, he’s helping power a Raiders running game that leads the way on a team focused on making the post season and perhaps even giving it a run at the AFC West crown.

Booker is another free-agent add from General Manager Mike Mayock who has done a strong job of finding talented players that’s were under-utilized on other teams, such as linebacker Nick Kwiatkoski. These type of players may not always get the headlines, but it’s those first downs that Booker fights for while Jacobs is tired that add up in the long run and help create a winning football team.