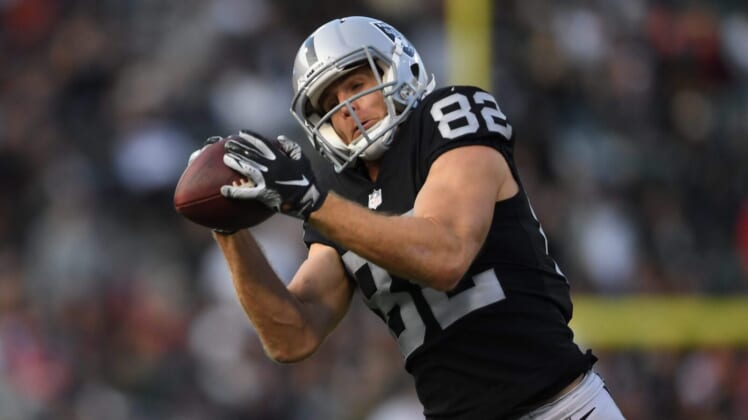 At the end of last season, Raiders coach Jon Gruden gave veteran wide receiver Jordy Nelson a hefty $3 million bonus earlier than he had to and insisted the receiver would be back in the silver and black in 2019.

Add an Antonio Brown and Tyrell Willaims a few months later and the Raiders decided to move on from Nelson releasing hin today, the club announced.

AJ McCarron played sparingly in 2018 and his $5 million cap hit was too much.

In a corresponding move, Oakland also released backup quarterback AJ McCarron saving $5 million in cap space. McCarron would have been due a $3.9 million bonus if on the roster Friday, in addition to his nearly $2 million salary if still a Raider on Sunday.

According to OverTheCap.com, the Raiders will save $8.568 million with the moves.

Nelson was a splash hiring – despite his age – for Gruden and the Raiders last season. The former Packers superstar hauled in 63 catches for 739 yards and three touchdowns. Nelson, despite some injuries, played in 15 games including 14 starts. In seasons in the NFL, Nelson has amassed 8,587 yards and 72 touchdowns during that span.

McCarron played sparingly for the Raiders in his backup role after coming over from the Bills for a 2019 fifth-round draft pick. McCarron was just one-of-three passing for eight yards in 2018.

The Raiders lone backup to Derek Carr on the roster is now Nathan Peterman. Peterman has appeared in eight games in his professional career with a 1-3 record. He is 68-of-173 for 548 yards, three touchdowns, and a whopping 12 interceptions. It appears the Raiders will look for new options at quarterback in the free agent market and the amateur draft.