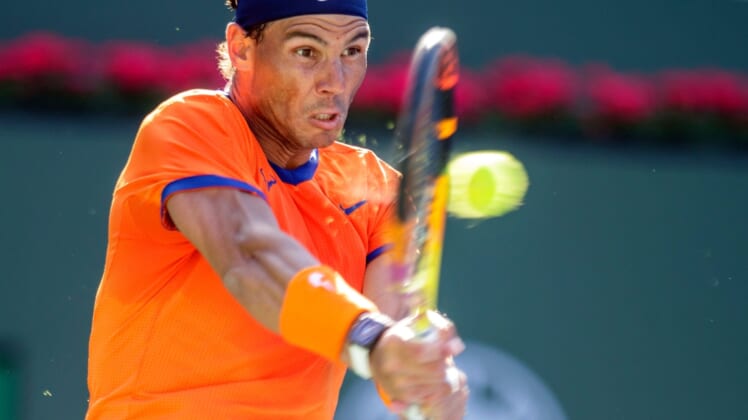 For the third time in four matches at the BNP Paribas Open in Indian Wells, Calif., Rafael Nadal needed three sets to advance.

Nadal improved to 19-0 on the year, his best start to a season, as he moved into the Indian Wells semifinals for the 11th time. He is seeking a fourth BNP Paribas Open championship.

Nadal trailed most of the first set against Kyrgios before breaking serve for 5-5 and later dominating the tiebreaker.

Kyrgios scored the only service break of the second set — which was set point.

Kyrgios couldn’t take advantage of four break points early in the third set. Nadal got the break for 4-3, then won every point on his final two service games.

“I think for moments I played well,” Nadal said. “It’s difficult to play against him, always tough because he changes the dynamic of the point very quick and his serve is huge, especially the first serve.

“I think I played a good third set. Returning better. I was solid with the serve. I just suffered in one game with my serve. Nick is one of these kind of players that you’re going to have problems when he’s motivated.”

The match featured no aces, and each player lost his serve multiple times in each set.

The other two quarterfinal matches are scheduled for Friday. Seventh-seeded Andrey Rublev of Russia will oppose Bulgaria’s Grigor Dimitrov, and 20th-seeded Taylor Fritz, a Southern California native, will take on Serbia’s Miomir Kecmanovic.