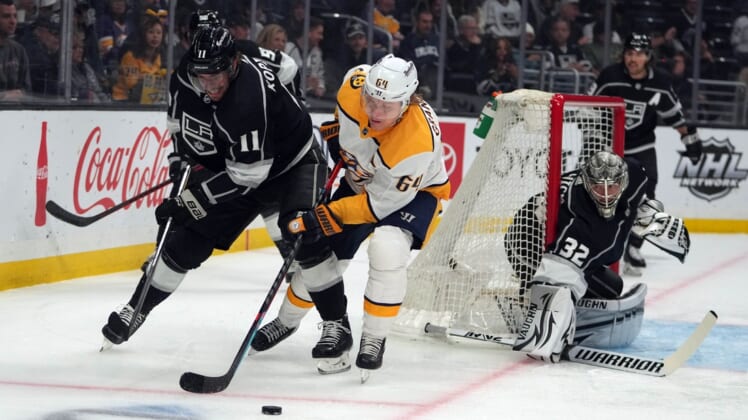 Quinton Byfield had two goals and an assist for the first multi-point game of his NHL career as the Los Angeles Kings defeated the visiting Nashville Predators 6-1 on Tuesday night.

Adrian Kempe scored two goals, Trevor Moore had a goal and an assist and Arthur Kaliyev added a goal for the Kings, who had lost four of their previous six games (2-3-1). Jonathan Quick made 24 saves for the victory.

Philip Tomasino scored and David Rittich stopped 29 shots for the Predators, who were coming off a 6-3 road win over the Anaheim Ducks on Monday, their fourth victory in five games.

The Kings scored short-handed, on a power play and at even strength to build a 3-0 lead in the first period.

Los Angeles jumped on top at 3:26 when Anze Kopitar forced a turnover along the boards in the Nashville zone and quickly fed Kempe coming through the slot.

The Kings went on the first power play of the game when Colton Sissons was called for crosschecking Gabriel Vilardi, and Kaliyev scored with a wrist shot from the top of the left circle to make it 2-0 at 6:36.

The Predators were on their first power play when Blake Lizotte fed Moore for the short-handed goal and a 3-0 lead at 10:39.

Tomasino cut the deficit to 3-1 with a power-play goal at 3:33 of the second period. Roman Josi assisted on the goal to stretch his point streak to 11 games (four goals, 21 assists).

Byfield, the No. 2 overall pick in the 2020 NHL Draft, snapped in a centering pass from Rasmus Kupari off the rush to make it 4-1 at 5:59 of the third period.

Kempe scored into an empty net with 6:42 left.

Rittich returned to the net but strayed too far from the crease while playing the puck, and Byfield shot it into the open net for a 6-1 lead with 6:13 remaining.

Nashville’s Matt Duchene also came in with a 10-game point streak (11 goals, nine assists), but he failed to record a point.