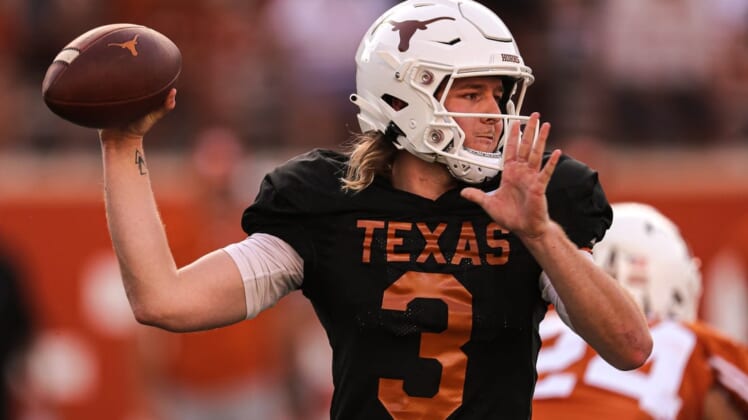 Quinn Ewers has won the quarterback competition at Texas.

Coach Steve Sarkisian named him Friday as the starter for the Longhorns’ Sept. 3 opener against Louisiana-Monroe.

Ewers, an Ohio State transfer, had been engaged in a competition with Hudson Card, who was the returnee at the position after Casey Thompson entered the transfer portal.

The 247Sports composite listed Ewers as the No. 1 prospect in the Class of 2021. A redshirt freshman, he spent last season at Ohio State.

Card was the starting quarterback at Texas at the beginning of the 2021 season before relinquishing the job to Thompson, who was named the starter at Nebraska on Friday.

Sarkisian told ESPN earlier this week that he was close to picking a quarterback and that he didn’t intend to run a system of rotating quarterbacks.

“I think it’s hard for a quarterback to get into rhythm that way, and I think you play differently knowing, ‘Hey, I don’t know how many throws I’m going to get,’ and you take too many chances,” Sarkisian said to ESPN. “I just don’t think the decision-making is very good.”

Card, a redshirt sophomore, threw for 590 yards and five touchdowns in seven games last season. Ewers didn’t throw a pass for the Buckeyes.

From Carroll High School in Southlake, Texas, Ewers was part of the Class of 2022 and reclassified to the 2021 class. Originally committed to Texas, he switched gears to Ohio State.

The move allowed Ewers to sign a NIL deal for $1.4 million, skirting a Texas law that didn’t allow high school students to benefit from name, image and likeness earnings.