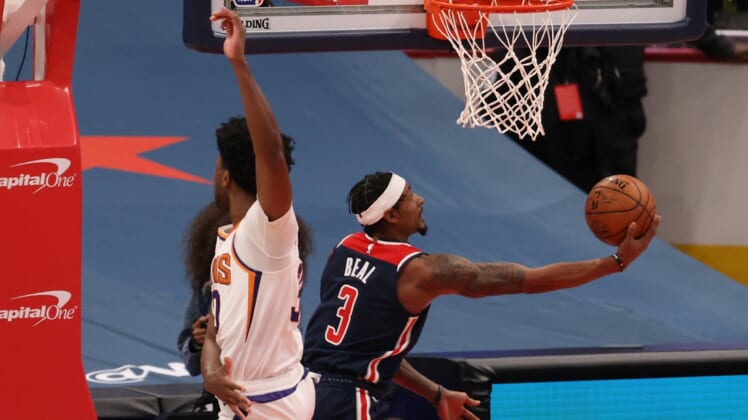 The short-handed Washington Wizards return to the court for the first time in nearly two weeks when they travel to San Antonio for a contest against the enigmatic Spurs on Sunday.

The Wizards have not played a game since beating Phoenix on Jan. 11 because six players tested positive for COVID-19 and faced quarantine for 10 to 14 days depending on when they first tested positive, in adherence to league health and safety protocols.

Washington held practice for the first time since Jan. 11 on Wednesday but had only eight players available, many of whom have not seen significant time this season. Deni Avdija and Rui Hachimura, both starters, as well as Moe Wagner, Ish Smith, Davis Bertans, and Troy Brown, are still in quarantine for Washington.

After the workout, the team complained to league officials about a heightened risk of injury should they continue with their schedule, which was set to resume with a game Friday in Milwaukee. That prompted the NBA to postpone the team’s sixth straight game.

The Wizards’ Bradley Beal said in a virtual news conference after Wednesday’s practice — which was little more than a shootaround because of the limited number of players — that playing on Friday had the “recipe for injury.”

On Saturday, Washington signed frontcourt players Alex Len and Jordan Bell and figures to have enough players to compete.

It remains to be seen how the extended layoff will affect the Wizards on Sunday against the Spurs.

“We don’t have a blueprint for this,” Washington coach Scott Brooks said. “The last thing I want to do is put our players in a position where they’re going to be susceptible for injury. I definitely worry going forward because these are our healthy guys, and the conditioning is definitely behind the teams that we’re going to be play.”

All-Star guard Russell Westbrook, who missed the Wizards’ two most recent games with a left quadriceps injury, will travel with the team to San Antonio (and then on to Houston and New Orleans), but there is no timetable for when he will return to play.

San Antonio returns to the court after a 122-117 loss to the Dallas Mavericks on Friday in the Alamo City. The Spurs cut an 18-point deficit to just one point in the final minutes but could not get over the top, falling for the second straight game.

DeMar DeRozan led the Spurs with 29 points while LaMarcus Aldridge hit for 26. Keldon Johnson poured in 17 points and grabbed a career-high 14 rebounds, Rudy Gay scored 16 points and Patty Mills had 13 for San Antonio in the setback.

“We dug a hole for ourselves, like we often have starting games,” Spurs coach Gregg Popovich said. “But as the game went along we got more and more aggressive, more and more physical, communicated better, and they didn’t give in after going down 18. Down the stretch we missed a couple shots, Dallas made a couple shots — game time.”

The Spurs played all but the first 1:02 of the game without Dejounte Murray after he rolled his left ankle. Popovich said after Friday’s game that he expected Murray to “be fine.”

After going just 4 of 33 from beyond the arc in its previous game, a 121-99 loss at Golden State on Wednesday, San Antonio hit seven 3-pointers in the first quarter on Friday, one shy of its franchise record for a single quarter. The Spurs ended up hitting 12 of 28 shot from long distance.

Sunday’s game, the Spurs’ 17th of the season, will be just their second against a team from the Eastern Conference this year — and the first since a win versus Toronto on Dec. 26.